What happened to DJ Lenny M?

A reader asked the other day whatever happened to DJ Lenny M's Music World, the mix-tape emporium on the corner of Third Avenue and St. Mark's Place... DJ Lenny M has been playing hip-hop and R&B and selling tapes and CDs out of that niche space for has long as I can remember — more than 20 years at least.

As the reader noted, "This has killed my daily Michael Jackson intake on my walk home."

Now that I think about it... I can't recall the last time that I even saw him there... One nearby shopkeeper said yesterday that Lenny closed up because there was "no business."

DJ Lenny M was busted in February 2009 for selling illegal CDs and operating without a license... (Down by the Hipster had the story here.) He reopened a short time later.

And now, a new vendor is in the space... 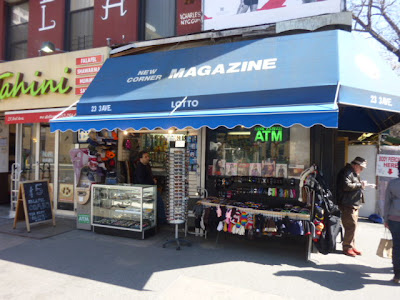 One that sells stuff that you can find anywhere else on the block...

A weekend in NoHo -- a sliver of a neighborhood whose spine is Broadway from Astor Place down to Houston Street -- has become an initiation rite of adolescence, as a weekend in Greenwich Village was for decades. The neighborhood, barely 10 years old, has become the spiritual and fashion adviser to the young of New York, whether from Ronkonkoma or around the corner.

Those merely clinging to hipness come, too, though they are not fooling anybody; black clothes are not enough. Antennas here are preternaturally tuned to the wrong sneaker or the wrong haircut. As the saleswoman at Alada, a clothing store, made clear, only yuppies buy "Die Yuppie Scum" T-shirts anymore.

Weekday afternoons can be lively, but the time to come, several recent visits suggested, is Saturday or Sunday, and not before 1 P.M. That is when residents take to the side streets and the faithful arrive, with saving the planet in their hearts and spending money on their minds.

They come looking for D.J. Lenny M. on the sidewalk, selling his homemade tapes of Reg Rockers, Club Rap and House Music.

Read the whole Times piece here.
Posted by Grieve at 7:35 AM

I miss him--always some nice tunes rolling through the air when I passed by.

I live right around the corner and immediately noticed when he left. I asked the perennial bouncer standing in front of Continental what happened to him. According to him, DJ Lenny got a regular gig in London. Not sure how reliable that is, but it's a nice fantasy.

Thanks, anon. When do you think this was? Last fall?

Hi EV - yep, I would say around last fall just as it started to get colder. That corner definitely lost it's mojo.

that was the last time i saw him, we talked for a while joking around.. he definitely held it down over there...

I once asked him how much he paid in rent for that smaller-than-a-closet-sized space he had. He said that the newsstand charged him $900 a month!!

What a pity. A friend of mine used to travel to US and bring lotsa mixed tapes full of garage house sets to Brazil. I miss his sound, and his voice during the sessions... dj...lenny...enny... enny... m.m.m.... lol.

His jungle telepathy mix tape is beyond comprehension.it has changed my life the very fist time I listened to it.the best music Evers heard by my ears and I'm a major enthusiast of DnB,jungle,break beats,minimal house,trip hop,and house.I used buy massive amounts of mix tapes when he set up shop at a street fair on spring st and broadway back in 1997,98.thank goodness I still have the telepathy mix tape there is one DnB that I lost and it's been 6 years there is not 1 day that I dont try to replay it in my head.These 2 tapes are beyond inspiring,beyond mindblowing.total capture of the atmospheric,urban and NYC sounds all in one it cannot be explained.laurent garnier is probably the worlds 2nd best Dj.Lenny where are you man.

Lenny turned me into a real junglist.Those tapes changed me.I feal sad when i go past that corner.
Knowing that things will never be the same again.There,or any where in N.Y.C.We miss you Lenny.God bless!

Can someone sell me some lenny m mixed tapes.

One the best mixed house tape I ever heard.

If only Lenny M one develop a website that sells his mixed tapes I believe he would do good very good business.

i have a few lenny m mix tapes one of them is a jungle telepathy mix.the best tape in the world.