It didn't take long for the conspiracy theorists to say what IF yesterday's fire turns out to be suspicious ... after all, 14th Street and Avenue A is prime real estate ... and many of the storefronts along this stretch of single-level businesses have been for rent for months and months...

As I noted last summer: "This area on 14th Street between Avenue A and Avenue B is ripe for development. So when when the 'space available' signs went up last summer (2008)...Hello Marc Jacobs! Hello huge Chase branch!'" 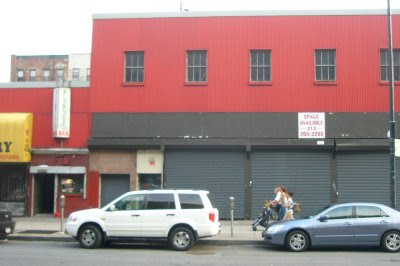 Well... according to the Post, the fire started at Pete's-a-Pizza, where a welder was working on a fire-access door. There, his welding torch apparently set some grease on fire. And that was it. 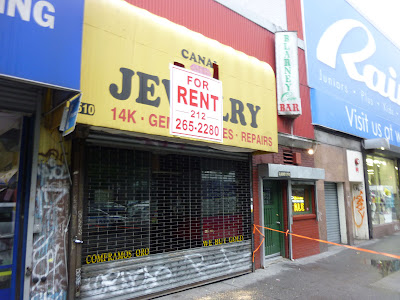 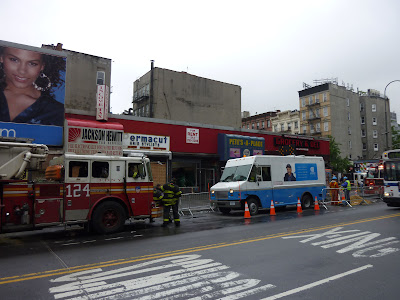 Anyway, I'm not suggesting that anything happened here aside from a terrible, accidental fire that destroyed four local businesses... but, it is something to think about... and we've been around long enough to see the unthinkable happen... luxury hotels on the Bowery? An NYU dorm popping up at the site of a venerable pool hall/concert venue//club?

Meanwhile, I've been told that the owners of Stuyvesant Grocery do have insurance. No word just yet on what their plans are. I meant to add that I hope all the businesses will be able to rebuild and reopen here.
Posted by Grieve at 7:00 AM

By writing this post, you ARE suggesting, with no proof, that something suspicious happened here. Shame on you.

he said it was caused by a welding torch.

NYU, and other corporations, do behave like vultures, picking off the corpses of the less fortunate. makes sense to speculate that someone, somewhere, in the NYU real-estate development office is saying, "Hey, boss, looks like an opportunity might have just opened up in a prime spot."

Anyone remember when NYU was angling to build that white dorm on 14th between 3rd and 4th, and just as they were doing so, the old Luchow's building, which was not part of their original application, and which had been standing empty for years at that point, suddenly burned down? NYU jumped at the chance to expand the dorm footprint into where Luchow's stood; amazing timing, I'd say.

What's going on there this morning?? More trucks, etc. I think on 14th between 1st and A.

Yeah, my friend called and said there were fire trucks out, street blocked, something about hazardous material trucks also. Perhaps it's all cleared up now. That was about 30 mins ago. Sorry if it's much ado about nothing, just suspicious that it's a block away from the fire . . .

I vote for HSBC to relocate there... Oh and also reopen another David's Bagel. Haha.

I walked 14th between 1st and A at about 9:30 this morning and fire trucks had blocked off the entire stretch, mostly only letting buses through. In fact there was a big group of firefighters in the street right in front of the church on 14th below 1st. I don't know what's up.

As for the luxury/NYU speculation ... I hope they stay far far away, obviously. I don't know what luxury buyer would want to face the ConEd plant or Stuy Town, but NYU will build one of their shitty dorms anywhere they can.

In the meantime I'll see everyone this weekend at the Blarney Cove on my way to Wash & Clean on 14! Stay strong! :)

i truly hope that all of the businesses are well-insured. who knows, maybe it could be a blessing in disguise for some of them.

I have always wondered why they haven't put an entrance to the L on this corner.
It would make subway more accessible to East Villagers and would alleviate
crowded conditions in the front of the train.