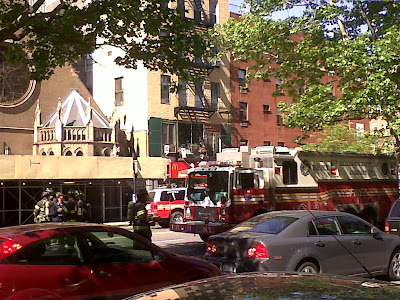 Several readers this morning have said more fire trucks were spotted on 14th Street... this time between Avenue A and First Avenue. No sign of fire. Per EV Grieve reader cheese: "Yeah, my friend called and said there were fire trucks out, street blocked, something about hazardous material trucks also." And there are other reports via Twitter... "6 Firetrucks outside of my apt, radiation alert in the East Village, "but its nothing," says Fireman. L train departing in 31 min? Insanity."

Has the all clear been given?

[Updated] Many thanks to EV Grieve Laura for the above photo from earlier today... She said the firefighters were checking something in the subway vents as well as walking around 14th Street too. Despite being told there were long delays on the L train, one showed up in four minutes.

[Updated] Jenn Doll has an update at Runnin' Scared:

We called the FDNY, who said that there was radiation detected at 442 East 14th Street (between A and First) via a routine meter read. The radiation is at "negligible levels" and "is not harmful to anyone; no injuries were reported." The issue is under investigation. There was no FDNY comment on whether it might be related to yesterday's three-alarm fire in the area.

How do we know when there is a radiation leak? Is there a detector/alarm or are we going by maple syrup smell?

Ha! I like the idea of a Syrup Scented Emergency Response System....

Or is it the other way around?

I think I almost preferred not knowing! Glad the radiation levels aren't "harmful."

Where is the radiation coming from?

Oh god I stuck my nose into their little grid last night to see the damage. I hope it doesn't fall off.