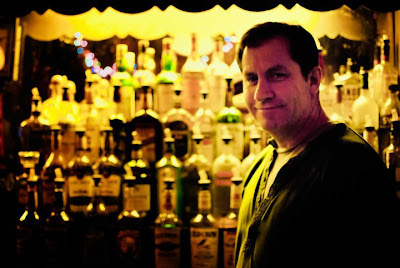 Several Sophie's regulars have passed along word that Howard O'Brien, a longtime bartender at the East Fifth Street bar, passed away early Saturday morning. Howard, who was 56, had been battling cancer. He had worked at Sophie's since 1986.

As one regular described him, he was "wonderfully reserved, incredibly erudite, peculiarly comic, full of bardic tradition and a straight talking, no nonsense scholar and gentleman in the right way." Indeed.

Meanwhile, there is a memorial service for Howard on Friday:

[Photo by Thomas Donal Ward via Facebook]
Posted by Grieve at 7:15 AM

Email ThisBlogThis!Share to TwitterShare to FacebookShare to Pinterest
Labels: Sophie's

That photo is perfection. It's how I shall always remember my friend Howard.

Damn, I'm so sorry. May he rest in peace, and best wishes to the Sophie's family.

I'd say they don't make 'em like Howard anymore, but the fact is they never did.

He was one of a kind and his love of language and life, his support for his friends was unparalleled and without restraint.

It was my good fortune that Howard was my high-school english teacher at the Connecticut school he taught at in the late 1970’s.

He was solely responsible for my initial exposure and continued interest in Beckett, Joyce, Shakespeare, O’Brien (Flann), O’Brien (Howard), Scorsese, etc. And I will be eternally grateful to him for that.

My deepest condolences go out to Jeff, Michele and the O’Brien family.

Dear friend, you will be sorely missed and well remembered.

Like PMcNair I too had the luck as a high school student to be taught english and drama by Howard at the Hammonassett school in Connecticut. He also taught an extra-curricular course which was basically the annotated ULYSSES. In two semesters we combed through half the book. Howard knew every reference, nuance, street corner and dream Joyce wrote. His class forever changed how I approach the written word.

Howard also directed me and Mr. McNair in a production of Beckett's ENDGAME. That experience altered as well as fired my life. I'm now a professional actor and I owe a great deal of my original inspiration to Howard. He taught me at a tender age to consider humanity as well as intelligence in my work and studies. And honestly, he wasn't much older than I was yet he was so much wiser.

And he always made me laugh. Always.

Man, I believe in ESP now. Just getting set to send Howard a letter when I checked him out on the web and found the sad news about his passing. Man what a bummer. Howard and I go way back to high school, last time I saw him was at my wedding in Scotland... he flew in from NYC unannounced for the day ! What a true friend, although we haven't been in touch recently, I hold fond memories of the man.

Howard was (is) my best friend forever, like a bro. He was the best man in the world, a great writer, a master. Missing him to death. R.I.P.
Giu

I haven't been around and got the news far too late. Howard was one of a kind. He probably wouldn't even remember me, but for me he was a unique New York character. Always thought of him as the kind of bartender you only get in movies. A seemingly unassuming guy behind the bar who was actually an intellectual superhero. Even small conversations with Howard intimidated me in my days as a regular at Sofie's in the early 90s. Not because he wanted to be intimidating--totally to the contrary. But you had to know your stuff to talk to Howard, because he knew his and had no time for BS or posturing.

It's a great loss for the East Village and NY that he's no longer with us. Although I hadn't seen him in years, and although I had probably been lost amongst the many faces that come and go for him, this loss is hitting me hard. Cheers, howard, good luck.