There's a new listing for a two-bedroom apartment at 4 St. Mark's Place... above Trash and Vaudeville in the The Hamilton-Holly House... it's a bare-bones listing with some blurry interior photos...all for $4,200... 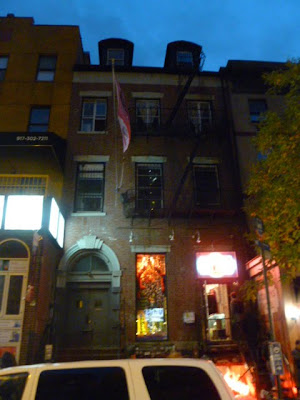 Thankfully, there's plenty of history on this building over at the Lower East Side History Project... here's an excerpt:

The Hamilton-Holly House is an 1831 landmarked, Federalist style building which has housed the clothing store Trash And Vaudeville since 1971 (and has sold spandex to famous and not so famous rock and rollers ever since.)

The high-stoop and peaked roof also makes this a unique Federal-era construct.

This house, along with the entire block, was developed by Thomas E. Davis, who sold 4 St. Marks place to US Secretary of Treasury, Alexander Hamilton's Son in 1833, and lived here with his widowed mom and their immediate families for nearly a decade. (Alexander Hamilton was killed in a pistol duel with Arron Burr a few years prior.)

The Van Wyck family owned 4 St. Marks in 1855 when a classified ad appeared in The New York Times reading, ''Respectable middle-aged Scotch or German Protestant woman wanted to do the general work of a small family; apply immediately at No. 4 St. Marks Place.''

By 1870, the neighborhood was much less fashionable, and a census record shows the building was used as a boarding or lodging house.

It has been widely rumored that Last of the Mohicans author, James Fenimore Cooper lived here in the 1830s, but little evidence shows this is the case. At least not during this time period. (There were already two families of Hamiltons and Hollys occupying the space, among other discrepancies and lack of evidence.)

In the 1950's and 60's, this building hosted a variety of cutting-edge performance art spaces which ended up challenging the limits of the First Amendment in Vietnam War-era America.

The Tempo Playhouse and the New Bowery Theater were two notables, but The Bridge Theater really “pushed the limits” of freedom of speech and was eventually shut down.

The Bridge Theater was a Fluxus art house, and hosted the likes of Yoko Ono, The Fugs, and the Bread and Puppet Theater. Fluxus art is based on the work and philosophy of artist Allan Kaprow; and is mainly comprised of group-based, improvised, interactive, mixed-media performance art.

You can read the rest here.
Posted by Grieve at 6:59 AM

that is some good stuff!

This apartment listing isn't in the original structure, but located behind it in an addition.

Theater people can disagree (as we love to do), but I always site this building as the home of the very first Off Off Broadway production. http://www.villagevoice.com/2005-05-03/theater/watering-the-off-broadway-garden/

Last night's Seinfeld episode was the one where Elaine dates a man who turns out to be "poor". According to the stock footage used on the show his dingy apartment is supposed to be above Trash & Vaudeville.