The possible future of 200 Avenue A: A destination restaurant 'that involves all the senses' 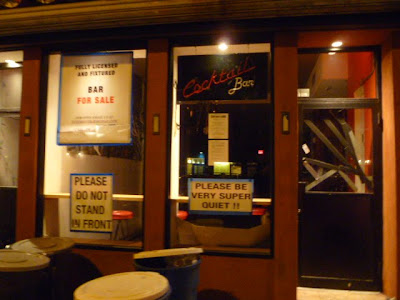 Tonight, the folks who want to take over 200 Avenue A (aka, Superdive) go before the CB3/SLA subcommittee... Last Monday, the team who plans to open a new restaurant here met with neighbors to explain the concept...

I did exchange e-mails with one of the partners who wants to take over the space... However, we never were able to meet to discuss the concept. Jill at Blah Blog Blah attended last Monday's confab... and she passed along some notes....

• They were very sincere in their desire to create something special and unique that would also provide a high return on investment.

• They were truly surprised that there would be opposition to their concept. They knew that SuperDive had a lot of problems ... but did not seem sensitive to the issues about how SuperDive had impacted the residents.

• Most of the owners/investors (there were about 6 people there from their organization) had never been to the block on a weekend night. The residents with the most vocal opposition were those that have been directly impacted by the problems that SuperDive caused in terms of direct noise and loss of sleep and lowered quality of life from those crowds. The next set of opposition came from people who are dismayed with the change of character in the neighborhood brought on by the frat bars, as well as the loss of retail diversity.

• Their concept is more about the concept and the branding than about food. They don't have a menu, prices or chef, but they do have an idea, funding and a manager.

• The landlord representative said that the owner of the building will not consider any tenant other than a restaurant ... but did not want something that was only a bar.

• They want to build a brand and then take it to the west coast (or possibly sell it?). To my ears, I heard something akin to "Hard Rock Cafe" — a branded theme chain with locations all over the world.

• They did not have a menu, a potential menu, or a chef. When asked the price point of the entrees, they had no idea. When asked $8 or $30, they said "somewhere in between."

• They intend to operate 6 pm-4 am 7 nights a week, serving food until within an hour of closing. When asked if they would consider closing earlier, they said absolutely not.

• They will have doormen and not encourage the fratboy scene

• They intend to do extensive work to soundproof the interior

• They were unclear about the music but it would fit into their "sense" theme, and would be bringing in live music and djs for an event or specific purpose. Not rock bands, but amplified music is in their agenda. But it's not a nightclub. When asked if they would consider not having live music, they said absolutely not.

• They have never owned a restaurant with a liquor license. They ran a themed sandwich shop called Project Sandwich in Soho which closed after 9 months. They run 40+ sushi bars in supermarkets around the city and Long Island.

• They plan to invest $1 million in this venture

• They served delicious sushi and cookies, which I enjoyed to their fullest

I asked the Superdive owners about the future here... and via e-mail, Team Superdive said: "The liquor license has been put in safekeeping and we all look forward to Nov. 15 when a prospective purchaser, (a fine intelligent respectful gentleman i might add), appears before the beloved community board.

Hopefully, the trial by kafka is not the experience he undergoes. a bright light perhaps but please comm bd 3 — no waterboarding!!!"

Speaking of night's meeting, we hear that CB3/SLA chair Alexandra Militano won't be able to attend. We heard that she fell last week and had to have emergency surgery on her elbow.
Posted by Grieve at 6:54 AM

Question: Will they have potato skins?

well. this all sounds pretty horrific.

The East Village is a smell machine, especially in the summer. Piss, shit, garbage... Clearly, the owners of this new place don't spend much time in the 'hood. It's a laughable idea. Can't believe anyone would be foolish enough to sink $1 million into this concept! It stinks!

Maybe they will use phenermones to get the crowd really worked up.

It wouldn't help with the crowd situation (or the smell machine, lol wut), but another branch of the Meatball Shop sounds like what they're looking for.

The Meatball Shop is very tasty, so I'm not sure if I could oppose it without some real effort.

who are these folks that come in with no information and ask to be welcomed into a (still) residential neighborhood with open arms?
do they think we are that stupid?
never been on the block on a weekend, never operated a bar.
ef you throw enough shit at the wall some of it will stick, but we don't need any more of that!
sounds like recent business graduates that hear there is a lot of money in trendy restaurant/bars.
we have enough of that already.

also sounds a lot like the council candidate that "will move into the neighborhood after they are elected".
who's running the store?tings

Based on cursory research into Blue Rhino Ventures LLC , the story of opening a restaurant is the thinly veiled concept for a cheesy eurotrash club.

One of the managing partners of the LLC is described as providing "exclusive access to the hidden nooks and cranies of the sexy and glamorous New York's club scene."

I love how they had the meeting and weren't able to provide any real information. Hmmm...what could they be trying to hide... Something smells fishy here...

Umm, who are these investors who are willing to dump money into a high-concept restaurant run by people who have only ever sold Long Island supermarket sushi (ugh!) and, for a mere nine months, sandwiches? Is this one of those examples of people trying to lose money on purpose? Everything about this sounds wildly tasteless and stupid.

Well the follow up was that it went nowhere fast at the CB3 meeting tonight. Because SuperDive never came before the Community Board when they changed their method of operation from a bookstore to a bar (with Boysroom operating in the basement I think - google it to see what I'm talking about - there is a whole host of fun reading about it) they had the choice to present as a transfer license, which meant they would have to abide by the original stipulations of being a bookstore, or, present as a new license, which is in a resolution area where no new licenses are allowed.

Based on the choice which was no choice, they were denied, and they will have to find a new home for their smell machine.

I miss Boysroom! Both their bookstore and 211 versions.

Anyway, this is a joke, right? "We don't have a name, a concept, or a menu, but we do got a cool mil! Here's some kickASS sushi! We've never owned a bar before but it's gonna totally rock and then we'll BRAND it and go West Coast brah! Sweet!!" *air guitar*

I mean I think it's great that Bill and Ted won the lottery, but Wyld Stallyns is destined to fail, bubble machine or no.