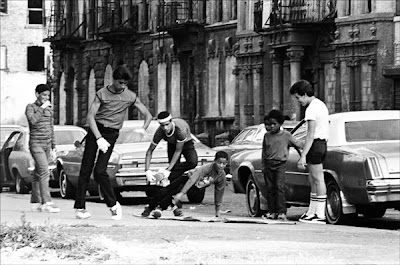 Lelaine Lau, founder of 403, a cultural salon in New York City which seeks to encourage discussion, the exchange of ideas, and action through presentations on the arts, culture and humanitarian concerns, passed along information about her latest event...which is tonight (apologies for the short notice..)

Please join me for a presentation and discussion with Lower East Side pioneer and photographer Marlis Momber as she takes us on her journey and a look back at the characters and culture of the Loisaida, and the cultural, physical, social and historical shifts which have taken place there over the last 35 years. It is a story of urban development, gentrification, affordable housing, homesteading, cultural identity, the arts, and the vibrant Puerto Rican community that once thrived there, and the invigorating, dynamic nexus of politics, music, art, and indomitable spirit of a community. Marlis Momber is a pioneer and long-time resident of the Loisaida since 1975. Formerly a successful fashion photographer, working for Elizabeth Arden, Gucci and Harpers shooting the likes of Grace Jones and Jessica Lange, her main body of work documents the struggle of the mostly Puerto Rican people in the Loisaida, and has been used to illustrate national and international publications on political and cultural topics. She is a living archive of information across 35 years.

MONDAY, NOVEMBER 15 FROM 7-11PM $40 ENTRY INCLUDES LIGHT DINNER AND COCKTAILS RSVP to 403rsvp - at - gmail - dot - com. The address will be provided at that time. Please note we only take cash at the door

To Marlis Momber, a German photographer who began roaming the neighborhood in the mid-1970s, that terrain provided a setting for decades of documentation. “People called it a war zone,” she said. “I grew up in Berlin after World War II, and it looked the same.”

On a recent evening, Ms. Momber strolled the streets near Umbrella House. The blocks that she photographed still exist, of course, but they have changed. The empty lots are no longer empty, and the abandoned buildings have been razed or rehabilitated. But not everyone can afford the thousands of dollars per month that the new apartments rent for. And, to Ms. Momber, the streets no longer look as compelling through a camera lens.

“Sometimes I miss it,” she said of her early days in the neighborhood. “We were all so much closer to each other back then.” You can read another feature on Marlis from The Villager here.
Posted by Grieve at 10:24 AM

I love seeing these photos because I have only ever heard stories of what alphabet city used to be, and have a hard time finding photos! its crazy!

I'd love to attend, but man the admission fee is steep!

Love her photos!!! Thanks for posting.