Another view on why 35 Cooper Square must be saved: For the area's new buildings 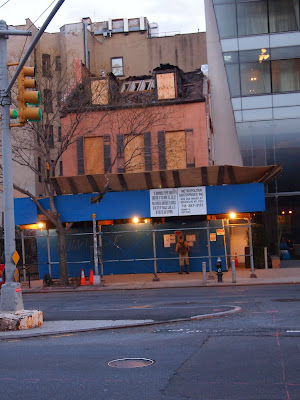 Here's the take from Fred A. Bernstein, writing a post for the The Design Observer Group:

The house is all that stands between two angled, glass-and-steel buildings (one of them, Thom Mayne's academic building for the Cooper Union, a masterpiece of contemporary architecture). Those buildings wouldn't be the same without their modest, gable-roofed companion.

Contemporary buildings feed on historical context. When that context is removed, even the best of the new buildings fall flat.

New buildings depend on context if they're to be become architecture, not just site-specific artworks competing for attention in an architectural petting zoo. Greg Pasquarelli, a principal of SHoP, one of the busiest firms in the city, recently described his firm's idea of contextual design: “Making sure that the building looks nothing like the buildings around it.” He was referring to his penchant for placing new buildings among the old, but what about ensuring that old buildings remain among the new?

When deciding what to preserve, the city's Landmarks Preservation Commission should think of some buildings — like the house on Cooper Square — as buffers, essential elements in making sure new buildings live up to their potential (to enliven, not entomb, the city).

Read his full post here.
Posted by Grieve at 6:52 AM

I like his conclusion, but Cooper Union is a "masterpiece"? That assessment could generate more work for EV Heave.

I have a problem with his statement 'the Landmarks Preservation Committee should think" - because there isn't much evidence that it does. What with the Bowery being gold and all that, all they see is stucco. And if that's enough to pronounce a death sentence, then the intelligence level there is about as wide and deep as a rivulet of dog piss running off a hydrant.

Thanks for that. It's similar to my thoughts on this topic - if every building on the Bowery looked like the New Museum, then you wouldn't need the New Museum. Meaning that it's these old buildings that make the new buildings look... well... New. The old makes the new special and vice versa.

Now I'm off to the LPC to speak on behalf of 54 Bowery.

They should just tear down the Cooper Square Hotel instead.

ridiculous. keep an old building to sustain the architecture of the new building?
tenements and mansions have lived side by side for hundreds of years, changing styles, adornments, materials, etc.; never getting in each others' way. now we are to believe that this new (and mostly awful) architecture needs to retain some of the history in order to be appreciated. what hogwash.
old buildings have a scale and a utility, sky and light are visible - and they last.
let's get rid of the ugly new buildings that have no character, history and are here to feed the greed of today. they have nothing to do with architecture (really!), only money!

Yes , as Robert Venturi noted in the immediately previous century , Architecture should be an ongoing dialogue between generations .

As Joseph Joubert aphorized in the 18th century :" Monuments are links which unite generations . Preserve what your fathers have seen".

Not a new idea this recognition that a plurality of form makes for a more interesting , informed and liveable cosmopolitan environment .

L, the LPC had its Public Hearing for landmark designation of 54 Bowery this morning. It should be a slamdunk for approval, but these days ya never know with the LPC. But since they were there, I spoke in favor of landmarking - just to use it as an opportunity to bring up 35 Cooper again. -BB

Thanks for the info, BB - now I realize what bldg. it is. Yeah, you would think the LPC would take one look and say yes yes yes, but...had I known, I would have joined you.