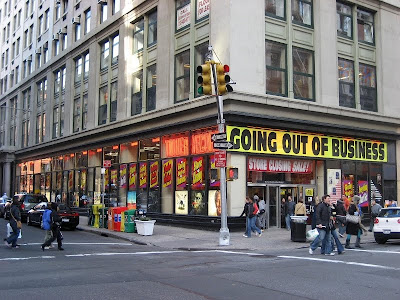 Major League Baseball has transformed the former Tower Records space on Broadway and East Fourth Street into a "fan cave" for two lucky bastards guys who won a contest. Per the Daily News:

Starting tomorrow, Opening Day, [Michael] O'Hara, 37, will watch virtually every MLB game this season, tweet about them and - Oh, My God! - get paid for it.

Major League Baseball has outfitted the high-tech home run haven with 15 huge HD screens so O'Hara and sidekick Ryan Wagner can catch all the action right through the World Series.

In homage to the downtown neighborhood's creative legacy, artists will conjure up players with portraits in ice, cheese and on Etch-A-Sketch screens, all under an 18-foot tall picture of Willie Mays' famed over-the-shoulder catch in the 1954 World Series.

all bow to the corporate culture overlord.

i wish that cave were going out of business instead

i would have loved to have that job back then, if the duties were to listen to every new album that came out on Tuesdays of that week and tweeted about them, if they had social media back then

So... I must have more testosterone than you guys. I'm jealous and would love to have that baseball gig. Sounds like a fun playland.

Oh no! People in the East Village (or close to it) like sports! The East Village is only for people who love punk music and hate "jock" or "mainstream" culture i.e. watching our nation's pastime, right? Heaven's to Betsy, this might attract people who don't have a single tattoo or own a black leather jacket!

As someone who lives in the neighborhood and whose family has lived in the neighborhood for many decades before the counter-culture influx, this attitude never ceases to piss me off. If you saw me walking down the street, you'd probably think I'm Yuppie scum (and I am a Yuppie by definition: Young (under 30); Urban (live in the neighborhood); and a professional (I'm a lawyer). But guess what? At work, I sue multinational corporations for civil rights violations, and when I get home, I read Hemingway, write short fiction and take jaunts to local galleries, performance venues and museums. I eat frequently at El Rinconcito, but I also get coffee at Abraco and occasionally dine at Frank or Caracas. A couple of mornings a week, you can catch me reading the Times with a plate of eggs at Stage. I go to Lucy's and Sophie's all the time, but have never been to Death & Co. Do I not belong in the neighborhood because I wear blazers and make a good living?

My dad, who lived in the neighborhood through the "bad old days" (which as he tells me were not anything close to the illusory nostalgia propagated on blogs like this), traveled west on Bleecker to listen to Miles & Monk during his youth and volunteered at Black Panther clinics in Harlem during his residency. He doesn't live in New York anymore - should I tell him not to visit because he's a full-fledged doctor now and pulls in six figures? He went to the little red schoolhouse and then Stuyvesant for high school, does he not belong in the neighborhood because he's never heard of the Ramones or Keith Haring? The neighborhood existed, and possessed unique cultural contributions well-prior to the '80s punk rock moment; be careful that in attempting to cryogenically freeze the neighborhood's identity you do not create a Simulacra. How about you read up on critical urban design theory before you go lambasting each and every new development? Thoughtful opposition to pernicious neighborhood developments is essential: hip-shot opposition to all development period is narrow-sighted and counterproductive.

So, is this juvenile baseball paradise a self-centered promotional enterprise by a corporate entity? Yes. It also sounds pretty awesome for the people who won the contest. Correct me if I'm wrong, but after Tower Records moved out, that space became a short-lived Toys 'R Us, and then some sort of pop-up gadget shop. I also believe that this space is adjacent to the perpetually vacant large commercial space on Lafayette that whose only use the past 4 years had been (1) to film a scene in I Am Legend and (2) to house a Halloween store that is there one month of the year.

If there is indeed something unique about the East Village, I hope it's that all different types of people can live in harmony here. Read some Fran Lebowitz: the mixing of social classes, professions, cultures, and race etc bears cultural fruit; monolithic neighborhoods stagnate whether they're the tonied blue blood UES or hermetically sealed counter-culture enclaves.

“And, of course, fans can watch the games or watch O'Hara and Wagner, who finished second in the contest, watching them.”

Jeeeesus 5th Gen, defensive much? Your comment is longer than the post! Anyhow, I just wanted to ask, wtf do ice and cheese portraits have to do with "the downtown neighborhood's creative legacy"? Do the PR dingbats responsible for stuff like that have some really crazy drugs or are they just wildly ignorant and unworldly? Sounds like someone has mixed up the EV with the Hee Haw State Fair back home.

@5th Gen. You should buy your dad a Ramones album, it sounds like you can afford it. I suggest the first one. It's really good.

5th Gen agree with you about most everything you wrote but take it from me, a life-long EVillager himself, calm-da-fuck-down. Who da fuck cares what the know-nothings thing about you, thjis, that or anything. just live your life true to yourself that's a lot more than most of the poseurs can claim.
By the way, your dad was right about horrible the neighb used to be. Still think it will go back one day

For the record, the Ramones wore black leather jackets *AND* were avid sports fans.

5th Gen, you're saying all the right things, but why do you sound like Patrick Bateman?

5th gen since you are living such an awesome life and have just the right healthy perspective on things unlike everyone else, why does it bother you so much that people have different opinions? you sure spent a lot of energy trying to set people straight. let it go, go back to enjoying your eggs and New york Times and your perfect perspective and don't trouble yourself any further over east village people who don't like sports.