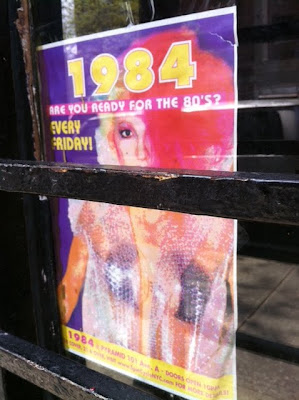 For 18 years, fans of '80s music have flocked to the storied Pyramid Club on Avenue A nearly every Friday to enjoy songs by artists from the Smiths to Cyndi Lauper spun by the party's promoter and D.J. Chip Duckett.

But now Duckett said he is pulling the plug on the party and moving on to other projects.

"Honestly, it's just time for me to move on to something different," Duckett said. "1984 has lasted almost twice as long as the '80s lasted. People who can drink legally now were three-years old when this party started."

And now, something obvious...

I wore out the tape of my 1984 soundtrack from replaying it over and over (it was on cassette). Ahhh.... the good old days of Eurythmics in the 80s!