34 Avenue A was one of the most intriguing items on tonight's CB3/SLA docket. In March, the committee rejected the proposal to turn the former Aces and Eights space back into a performance venue.

No name was on the appliacation for the space in May, simply: "To Be Determined, 34 Ave A (op)" 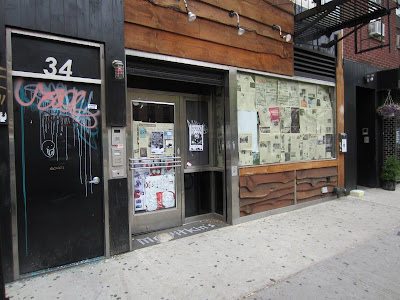 In any event, we'll have to wait longer to find out about the plans for the space: 34 Avenue A is a scratch for tonight. 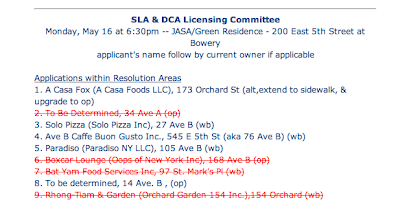 Meanwhile, one other item of interest: 200 Avenue A, the art gallery with a full liquor license. In previous posts on this the gallery, several readers claimed that they were misled when it came to sign a petition of approval for the plans.

For instance, per Cat Sitter in the City:

I wish I could take my signature off that Superdive/now we're an art gallery petition I signed. It really bugs me that the girls were telling me they were creating an art gallery. I had no idea it was an art gallery with a liquor license, and I wonder if they duped others in the same way.

Anonymous said...
Oh, great. I signed their petition. They said it was going to be an art gallery. They were two nice girls who didn't say anything about booze. I feel like I was hoodwinked.

Email ThisBlogThis!Share to TwitterShare to FacebookShare to Pinterest
Labels: 200 Avenue A, 34 Avenue A

I hear the art gallery is also going to have passed appetizers. The lies continue! What's next? A candy jar at the reception desk?

(If the community wants so badly for someone to operate this space in a non-disruptive way, they need to cooperate and support workable proposals. Fighting every operator, even the ones who aren't trying to run a keg party, means that area is going to continue to be a boring ghetto. After all, they act like it's such a rowdy party zone when there's 3 decent bars and a karaoke joint and nothing else notable in a four-block stretch.)

Once I went to an opening at an art gallery with a full liquor license. When I woke up the next morning, this was hanging on the wall in the bedroom.

brian van cautions us that "Fighting every operator, even the ones who aren't trying to run a keg party, means that area is going to continue to be a boring ghetto."

yeah brian - a boring ghetto of bars with underage, noisy, thinking they are with-it, vomiting, selfish, pretentious people.
need i go on?

an as for "After all, they act like it's such a rowdy party zone when there's 3 decent bars and a karaoke joint and nothing else notable in a four-block stretch.)"
sounds like we should keep pit that way. Specifically how many bars does an area need?

I was foolish enough to sign this petition, but my cat Charlotte wasn't, which proves my cat is smarter than I am. She wanted more information first.

@Ken from Ken's Kitchen-Hah! Reminds me of the art auction episode from Taxi. About 20.43 in, Louie demands something classy like a “Vincent Van Patton”. Around 21.31 in, see what Louie bought.

Petitions are ridiculous. The people on them are not verified. It's an absolutely worthless process. The party with the money to pay people to gather the most wins. Period.

Never sign a petition.
Never.
No matter what.
Let's end the practice.