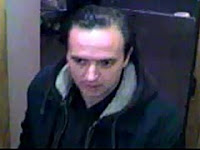 Per the Daily News, police charged 35-year-old Imre Meszesan of Bed-Stuy with burglary and attempted rape. A cop reportedly recognized Meszesan from a prior arrest. (No word just yet on the nature of that previous arrest.)
Posted by Grieve at 7:05 AM

He's from the East Village, actually. He probably just lives in Brooklyn.

I always thought he looked as though he were from some Eastern Bloc country. And where is a large population of those peeps these days? Brooklyn!! Nice job on the part of the officer who recognized him.

The moment you start judging people by how 'you think' they look like, you're skidding down a slippery slope. Get emancipated!