'Public Assembly' for the former P.S. 64 on Friday

Oh boy it has been a long time since we've discussed the old P.S. 64/CHARAS/El Bohio community center behind the Christodora House.

First, though. We spotted these flyers on Avenues A, B and C in the past few days... 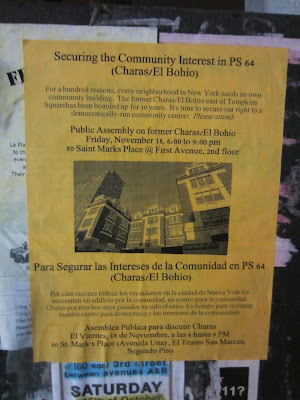 As you can see, it's advertising a meeting Friday night from 6-9 at Theatre 80 on St. Mark's Place... dubbed as a "public assembly" to discuss the long-dormant space. However, there isn't any contact information or sponsor listed.

So we reached out to Kurt Cavanaugh at the East Village Community Coalition, a group that led the effort to successfully landmark the building. However, Cavanaugh told us that his group had nothing to do with the meeting. (We're waiting to hear back from Lorcan Otway at Theatre 80 to see if he can tell us who is behind the meeting.) 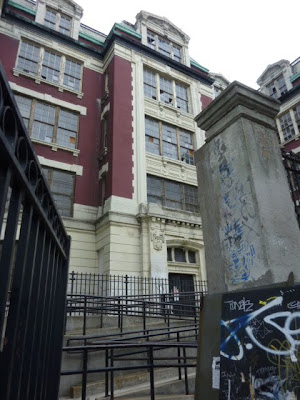 Anyway, there's a long, complicated history here. Briefly. Gregg Singer bought the formerly city-owned building in 1998 for $3.15 million. His plan: a 23-story megadorm. But, in the face of strong community opposition, he was never able to get those plans off the ground, and the building sits rotting (with help from the owner). The Villager has extensively covered this story through the years. Check out their archives here.

In August 2009, there was a rebranding campaign for the space... 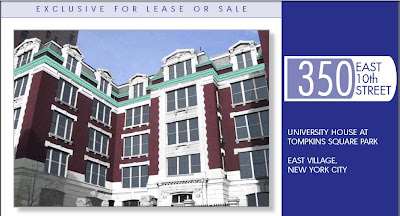 According to marketing materials (PDF) that (the now defunct) HelmsleySpear circulated, the landmarked space at 350 East 10th Street (and an aside, the rebranding was not using the 605 E. Ninth St. address) was now known as University House at Tompkins Square Park.

A quick vision of Hell... 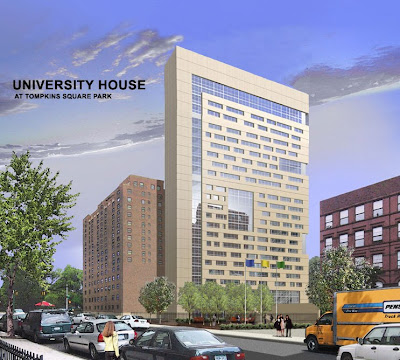 We go back to May 2010 for the last news on the space. The Villager reported that a man named Kim Barton wanted to transform the space into the Tower School, a 600-student, nonprofit, independent school.

So here we are. Anyone have any updates? Tips? Gossip? Please send them our way via the EV Grieve email

Rebranded P.S. 64 up for grabs: Please welcome University House at Tompkins Square Park to the neighborhood
Posted by Grieve at 6:54 AM

oh, what memories this brings back! I still believe in my heart that Guliani's henchmen killed Armando Perez. It happened the weekend after the Street Crimes Unit got into big trouble for Diallo or something, and they had to make it look like the Unit was indespensible. It was the only night that year when there was a murder in every borough. Always made me wonder if the other 4 murdered people were a pain in Guliani's butt, too, and if those cases remain unsolved as well.

lets get this building turned around...the community needs a cultural anchor and the former PS 64 should be resurrected from its current state....can we get the city/scott stringer/landmark council to revisit the situation...its been too many year of talk but no action.