So, as you probably know, some of the construction netting and plywood came down Tuesday on the north wall of St. Brigid's on Avenue B and Eighth Street... Yesterday, workers peeled back just a little bit more of the netting... exposing even more of the under-renovation church... Bobby Williams took a look... 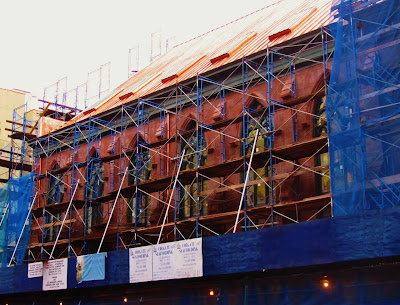 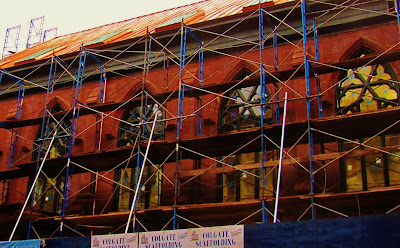 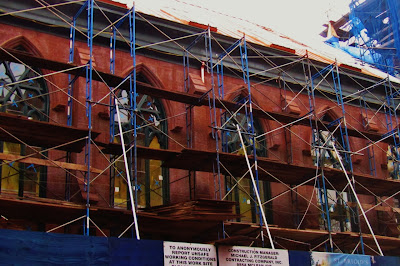 As The Villager reported this past July, the church will have its original 1848 look... Per the paper:

Both the west and north facades (what everyone from the street sees) of the building are going to be sheathed in cast brownstone slabs, more or less restoring the look of what was there when the church was first built in 1848. They are working on this now, and roughly a quarter of the north wall has already been installed. The original north wall had to be completely demolished and rebuilt as part of the process of restoring structural stability to the church. This necessitated filling the entire church interior with scaffolding in order to support the roof during this reconstruction. But it was a big improvement over the original repair plan to simply re-stucco the existing facade.

Bobby also sent a view of the new roof... 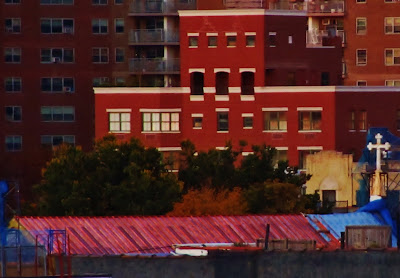 And as a bonus — a view of the church from Tompkins Square Park circa the early 1870s ... 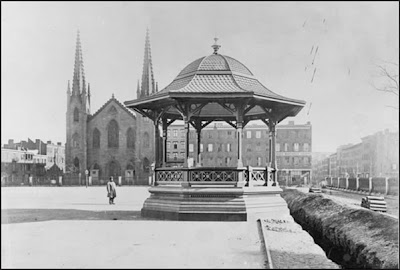 Here's the caption for the photo from The Villager:

A photo from around the early 1870s showing St. Brigid’s Church with its spires on Avenue B and, in foreground, a gazebo in Tompkins Square Park. Around this time, the park was stripped and leveled to turn it into a parade ground for the 7th Regiment. The gazebo had been likely the reviewing stand for the military brass. After much public outcry, in 1878, Tompkins Square was redesigned and rebuilt as a public park.

LOVE the old photo!!!! That gazebo is a gem.

"Both the west and north facades (what everyone from the street sees) of the building are going to be sheathed in cast brownstone slabs, "

Cast brownstone slabs?? there's no such thing, brownstone is MINED from the earth in rock quarries, it is a course grained layered sedimentary rock that was popular in the 1860s in the city for facades, windowsills and elements, but they soon found out this stone rapidly deteriorates in the weather- spalls, cracks and flakes off, so you will find sandstone (or brownstone if you wish) keystones with their faces and cavings completely rotted away. That was when kiln fired terracotta which the stone carvers literally rioted over putting them out of work started falsely claiming the terracotta would never last, that only stone would last (it was proven to be a lie) and terracotta replaced carved stone as THE material to use on facades.

What they are calling here "cast brownstone" to me as a professional sculptor who specializes in re-creating the Victorian and Art Deco era facade sculptures suggests they are using tinted CONCRETE and I have taken one Ebay seller of a "brownstone carving" to task when he admitetd his "brownstone carving" was not carved STONE commonly referred to as "brownstone" at all, but was a "proprietary mix that takes a week to cure."

Let's be accurate here, if it's any form of CAST material it is tinted CONCRETE, real brownstone was MINED from the earth in huge slabs and cut by machines into smaller blocks, there's no "casting" involved!
RD Wolff
http://RandallWolff.com

Oh, calm down, Randall, you're REALLY late to the party, but there's no need to pitch a hissy fit on top of that.