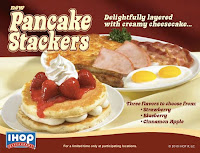 In an interview with Gothamist today, our friend David Cross says that he's leaving the neighborhood behind for Brooklyn... He specifically mentions 7-Eleven, IHOP and the various Subway sandwich shops as helping hasten his exit ... "It's mildly heartbreaking. It's just becoming more and more like a mall. I might as well be in St. Louis. It's very, very quickly, rapidly losing a lot of its character."

We hope that he still stops by here to visit, especially when people start badmouthing UCBeast and cargo shorts again.

Anyway, the East Village stuff is one small part an interview where he talks about the upcoming season of "The Increasingly Poor Decisions of Todd Margaret." (Begins Jan. 6 on IFC! Woo!)
Posted by Grieve at 1:34 PM

yeah they don't have any transnational food outlets in Brooklyn.

I will miss stalking him.

and Papa John's and TGIF(and soon, might as well jinx it -- Denny's, Chili's, Arby's)

Now that he's leaving EV, can I now mention that he is (or was) a regular at Scratcher.

Ah thats too bad, I would see him around from time to time.

Unrelated, what is your guys' obsession w cargo shorts?

Too bad he's leaving, but what really disturbs me are those Pancake Stackers. Pancakes layered with cheesecake? That's enough to drive anyone away!

There are far more food chains in Brooklyn than Manhattan! Apparently eh has not been around Fulton St or DT Brooklyn..Sheesh!

I can't say that I disagree with Cross. The East Village has lost more personality in the last 5 years than it has over 2 decades. I'm tired of all the mom-and-pops being pushed out by unneeded restaurants and bars. I'm tired of the historic tenements being torn down to make way for ugly condos for douches. I'm tired of young people who come to the hood, shit on it, and leave the cleanup for someone else.

The hood I know and loved is disappearing quickly.

I left. granted I'm still nearby in Stuytown but leaving EV was definitely a calculated decision.

Wow. Nice job anon3:20 PM.
You obviously couldn't even read the first sentence of the post.

I, on the other hand, after 45 years between Delancy and 14th Streets, am leaving the EV for a much more pedestrian reason ... the rent is too damn high!

Anyone know where he's heading to in Brooklyn? Just wondering if he'll stray far from the parts (alas)where character started draining away long ago ...

not far away for us what about OHIO

The thing I will miss most about David Cross is Amber Tamblyn.

The guy from the Chipmunks movies doesn't like enfranchising and cashing in?

@ 12:26
You know, I thought I would go one whole David Cross article without someone bringing up This movie, but you got it in there, thanks. Thanks for reminding us all that he had an indiscretion. I could name worse offenses in this category, but this one in particular seems to really grind peoples' gears. Maybe Cross deserves it, if hes going to be the guy he is, he should prob not give people these opportunities. Personally, I say, give it a rest, we will always have Tobias Funke...

@Hey19: I agree totally. Never understood people putting down actors who work for a paycheck now and again. It affords them the ability to do independent films and shows. Bill Murray did "Charlie's Angels" for the paycheck, does that make him horrible? I don't think so.

New York is getting a whole lot less interesting every day that goes by. It's cleaner and prettier than it used to be, but I find myself more and more inclined to stay in my apartment. I feel like there's nowhere to just go out and disappear, it's so crowded even all the way on the fringes. I miss the empty streets of avenue C and the feeling that the far west village was a place only residents would go. One thing you can be sure of about New York though, it never stays the same. To me Brooklyn looks way more attractive, but I'm stuck in this rent stabilized apt. Sounds like a fwp i know, but I'm feeling ready to jet out of this town. Boring loud rich people everywhere. That's not fun.