Matt LES_Miserable passes along the following... tonight on Avenue A near 14th Street... 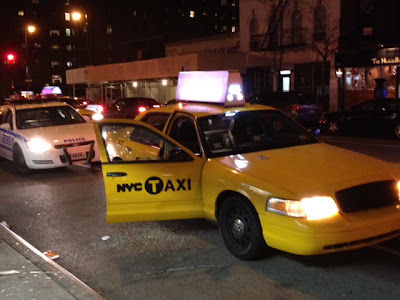 As you can see, someone blew out the window of this cab... 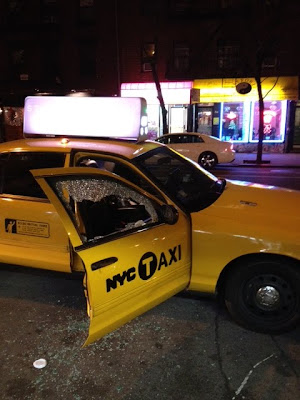 The police were on the scene. According to Matt, the driver was very shaken up... He told Matt that a passenger "shot out" his window ... perhaps a dispute over the fare?

Garth Johnston followed up on this story today at Gothamist... Unfortunately, not much else is known. Per the post:

When we called the NYPD's DCPI they had no information on the incident. Curiouser though, when we tried to reach out directly to the Ninth Precinct this morning nobody answered the phone either on the main line or at the community affairs desk. Finally, the TLC couldn't help illuminate the situation as these sorts of things apparently aren't even reported to them by the NYPD.

Email ThisBlogThis!Share to TwitterShare to FacebookShare to Pinterest
Labels: Avenue A, cabs

And it wasn't even raining.