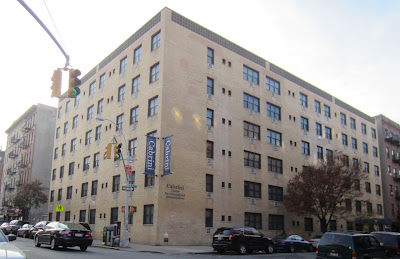 Last month, we first reported that Ben Shaoul was the mystery buyer behind the sale of the Cabrini Nursing Center for Nursing and Rehabilitation on East Fifth Street at Avenue B.

According to a source, Cabrini officials made an offer to Shaoul in November to pay a substantial amount of money just to receive a lease extension — in addition to more rent. (Cabrini officials have been planning to relocate to a still-unspecified site.)

As the Lo-Down previously reported, the Cabrini building sold for $25.5 million.

Today, the Lo-Down has a copy of the letter that elected officials have sent to Kenneth Fisher, the attorney representing Shaoul's Magnum Real Estate Group. There is now concern that Magnum plans to flip the building.

Here's part of the letter (read the whole thing here), written by State Sen. Daniel Squadron and signed by an array of local politicians:

As the Magnum Real Estate Group pursues a sale, we ask that the needs of the senior community on the Lower East Side be taken into consideration. There are a number of options to preserve nursing home beds. The critical importance of those beds for the individuals already accessing CCNR’s service, as well as for the wider community of families and caregivers, must be prioritized.

Cabrini's lease runs out in April.

Previously on EV Grieve:
Claim: Ben Shaoul is the new owner of Cabrini nursing home, will convert to condos
Posted by Grieve at 12:32 PM

NO!!! I live right next to it. Not another glass condo. Next they'll be buying the school and 'flipping' it. Way to take any sense of a neighborhood community and replace it with more uncalled for construction. Then after have rich d-bags move in who want to make the EV a trendier meatpacking district at night.