Earlier this week, an EV Grieve reader told me that the NYC Department of Education closed the Open Road Park, which is adjacent to the East Side Community High School on East 12th Street between Avenue A and First Avenue.

This also happened back in June, as we first reported. During a meeting in late June, Mark Federman, the principal of the school, told residents about increased "incidents of trash and debris, smoking cigarettes, marijuana — some selling of marijuana."

The park reopened as of July 1.

We thought this most recent closure would also be temporary.

The park's skateboard ramps have been discarded along with the rest of the trash along East 12th Street ... 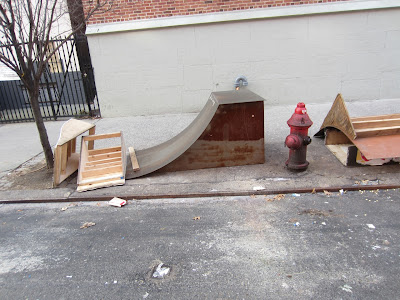 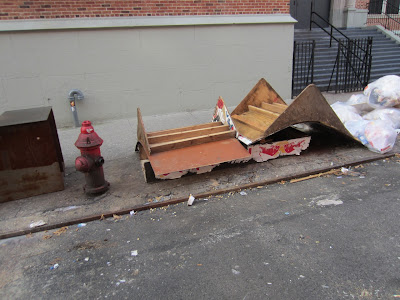 A reader on Facebook just commented, "A white station wagon has just removed all but the dark brown ramp, which wouldn't fit in his car."

Why the Open Road Park is closed
Posted by Grieve at 10:59 AM

Criminalizing skateboarding is so '90s.

one of the few places where dynamo kids on boards had open expression.
i won't rail, at the moment, as there is a lawsuit pending. And individuals lawsuit.

Horrible!!I never saw anything illegal going on there--I used to photograph there frequently. Loss to the neighborhood--was a nice melting pot for all.

This really sucks for the kids. I live very near, but not on, the park, and I've honestly seen very few of the kind of violent incidents described on the threads. There seems to be a bit more pot smoking than most parents approve of, but I've never been harassed, had rocks thrown at me, etc. as some comments have described. Although I don't doubt the veracity of these claims, I can't help but think these are isolated incidents, since I have to walk by the park 4 or 5 times a day. Perhaps there just needs to be better policing? Scrapping the whole park concept seems a bit extreme to me; we've coexisted with the skaters for years, and I'm sure that we can come to some sort of mutually acceptable agreement that curbs objectionable behavior while still allowing the kids to have a place to go hang out and do something that keeps them occupied and out of trouble.

Actually I don't myself care much for skateboards, even the noise they make sounds like nails on blackboards to me, but I think that they deserve a place to play and do not approve of this move, a little pot or not.

Had a huge amount of fun in this park - with skaters a third of my age just out there doing their stuff. Much respect, brothers. I will miss all of you. We, as social beings, NEED a gathering place to socialize, have fun, learn about each other and life - and this place will live for a long time in many skaters lives as that place.
Perhaps a different approach should have been done. But in this modern world of control and power - erradication and removal is the new way (actually it's been going on throughout history). Sad. We need to learn how to live together, not apart.
Skate for life, brothers!