About a crime scene on St. Mark's Place 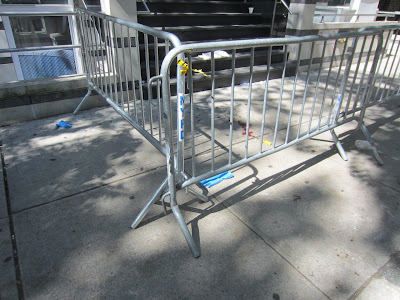 Several readers this morning pointed us to the front of The Saint on 56 St. Mark's Place between First Avenue and Second Avenue... there is a crime scene of sorts in front of the steps. According to a neighbor, police here say that someone fell down the stairs and cracked his or her head on the sidewalk. Detectives were called in earlier to make sure there wasn't any foul play associated with the fall, the neighbor said.

The barricades in front of the building were leftover from yesterday's Dance Parade. Workers have since removed the barricades.
Posted by Grieve at 10:49 AM

I asked Bob Arihood if in a fantasy I could come with him on a weegee shot..he responded "if you want to see a bloody dead body at 3AM you can come". I declined.
Melanie Neichin