Over on East Fourth Street and Second Avenue, Belcourt has closed... 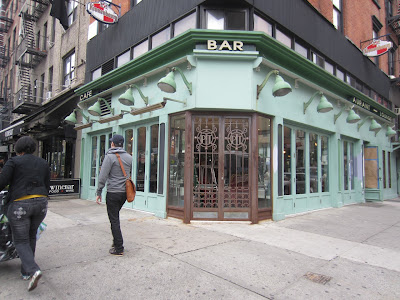 As we pointed out in January, the space will give way to a "new American" restaurant called Calliope run by some Prune alums... According to Diner's Journal, Eric Korsh, the executive chef at the Waverly Inn, will be opening the space with his wife, Ginevra Iverson, Prune's one-time sous chef.

And if you were a fan of Belcourt's "famous brunch and Oyster hour," they'll be doing it across the street at Nomad now, according to the Belcourt website... 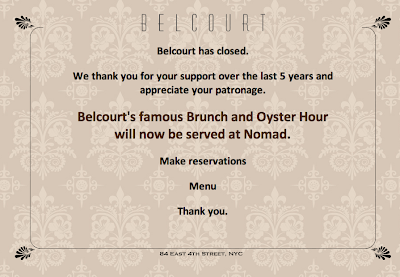 Eugh, Belcourt was the worst. Overpriced, not great food and it took FOREVER.

Feh. Another new, empty EV institution that no one cares about. They come, they go, they do nothing to enrich our lives.

This place had great biscuits.

I liked the place, although honestly we would only go for brunch. The brunch was excellent.

Didn't understand the rusty outdoor seating and dirty tables, though. "Rustic" does not have to mean "rusty".

another over-priced restaurant that no one cares about. will these places ever learn? i pick Saxon & Parole to not be far behind.

...the constant turnover continues, and the community board cares not on lick about stabilizing the neiborhood.