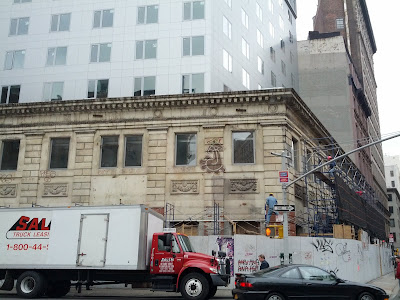 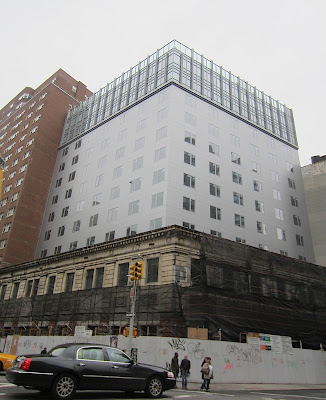 In any event, it seems as if the stalled/unstalled/too tall/view-blocking hotel project is dawdling along ... by our count, construction has entered its fifth year. Curbed's first post on it went up on July 18 2007.

It wasn't always a Hyatt property, of course... early on hotel developer Sam "McSam" Chang's group was behind the construction ... It became Hyatt's problem property in November 2010... 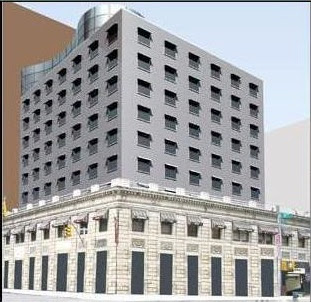 Newer rendering with the hydroponic bamboo garden and halo! 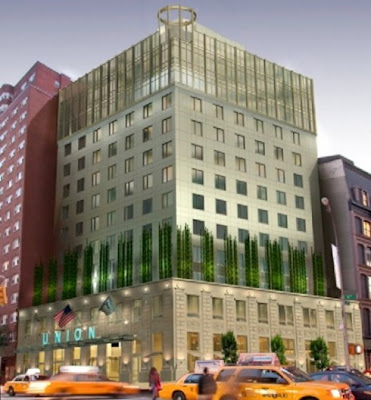 [Image from Archpaper via Curbed]

Last official word on this via Hyatt was a fall 2011 opening.

Previously.
Posted by Grieve at 6:39 AM

oooof. boy that looks bad.
it does not even really look like the rendering.
kind of like putting a crayola marker top on top of a montclair pen.

The only "good" thing about this wreck is that it's set back from the facade of the poor old building it's sitting on, so from certain angles you can't see the upper portion at all. So if you try, you can look down the street and still see just the old building.

omg , this is awful

Wow- that is awful. I always loved the antique shell of the place but they just totally messed it up- And I'm getting tired of all these hotels everywhere. It's like all they care about is more tourists. Screw the locals, right?

it could have been better