An interview with the topless advocate

Moira Johnston, the activist who has been raising awareness that it's OK and perfectly legal for women to be topless in the city, continues to receive attention. (Amazing, huh?) 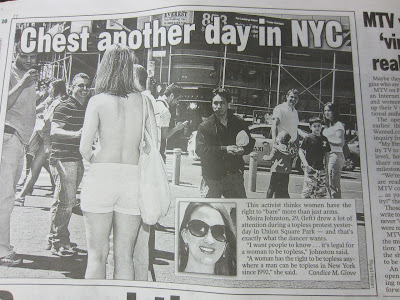 Also, via Gothamist, we learn that Joey Boots filmed a video interview with her the other day at Union Square. Highlights include the man who says she is "going against God's law." She's topless here, so NSFW...

Previously on EV Grieve:
[Updated] There is a woman who has been walking around the East Village topless
Posted by Grieve at 2:03 PM

I like that she wears a necklace. Never forget to accessorize. It makes the outfit.

i want to say something critical that won't get censored. i guess i am going to go back into my hut and figure out how to say it in a nice and civilized way.

I love how Joey handles the morons with their religious arguments. I also love the chubby woman toward the end who is wearing a top her boobs are spilling out of but criticizing this girl for showing some nipple.

i'm trying to look away

I'm already annoyed by her and I love floppy tits.

tired of her. so tired.

HHAHAHAHA I love the camera man's true NY ball-bustin. To the Spanish speaking woman and the other jamoke.

"simple-minded people like you" he don't give a fuuuuuck!

this person clearly has no issue with exposing herself to children who happen to be on the street, something which should land her and her small boobies in riker's for a night or two.

"exposing herself to children" Sorry, but I don't get the problem. What does she have that children should be worried about? We all have nipples, even children. I don't recall that there is anything bad or evil about them. She's not doing anything to any child. And there's nothing a child can't see men showing on a basketball court on a hot day. What's the problem?

There are children in NYC?

If here name had been "Moira Johnson" ("more johnson" yuk yuk) I would have called Ian Flemming and said "I have your next Bond girl."

I'm pretty sure I'm going to take it off in public at least once this summer. Thanks, Moira!