A reader offers details about the restoration of St. Brigid's 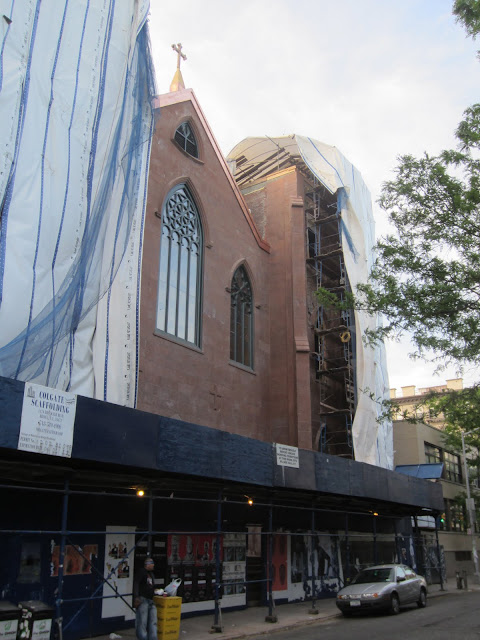 A reader left this comment on our post Wednesday afternoon about St. Brigid's on Avenue B at East Eighth Street....

I’ll try and clear up a few misconceptions as I live near the Church and have been following the process since it began nearly 10 years ago.

1. The Church was never declared a NYC landmark. The NYC Landmarks Preservation Commission ruled against the request for status by a group of individuals because: a) The Church had been modified too much over the years to determine what exactly was part of the requested status. b) It was in a horrible state of disrepair at the time and its very survival made it a huge risk. c) The Landmarks Commission rarely designates Churches because they change so often and the various entities that own the churches don't want to be designated because it makes it difficult for them to make significant changes. They have a very strong lobby in NYC.

2. The central portion of the facade scaffolding was removed [Wednesday] because the contractor needs to start work on the front stairs. He is hoping his portion of the project (all the major interior and exterior construction) will be completed this summer. Significant work to do still on the two towers, roof, exterior fencing, the back, and the interior.

Once their work is done the "liturgical package" work begins: including all interior furnishings —pews, alter, and hopefully the original Keely carved organ. Keely was the original architect and when the Archdiocese tried to demolish the Church '04-'06, the City courts mandated the Archdiocese carefully remove and preserve all interior artifacts. Now no one seems to know where the organ and many other artifacts have gone. a tremendous pity and in contravention of Court orders. The organ was a beautiful piece of work.

Once the liturgical package is complete, the church has to go through a number of city inspections and approvals. My guess is that St. Brigid's might open up for "business" sometime in the early-mid fall. The new parish priest has already moved into the adjacent rectory.

3. The "anonymous" donor is still a mystery. No one has stepped forward to admit making the original $20 million donation, which most likely grew by an additional $10 million after work began and the architects realized they would have to completely redo the outside & foundation. Of the original $20 million, $10 million was dedicated to the restoration, $8 million was given to St. Brigid's school next door and $2 million was put in a church maintenance fund.

Some have speculated that it was Chuck Feeny, multimillionaire Irish-American philanthropist, who made his fortune with duty-free shops and started the Atlantic Philanthropies Foundation. Both he and the foundation have steadfastly denied this. Easy to see why. Others suggest that the Archdiocese itself anonymously "found" the money in order to stave off a confrontation with the New York State Supreme Court where a final case was pending back in 2006. If the Church lost that case it would have had tremendous implications for the ownership of Church property throughout the entire country.

4. There are many good things the current restoration architects, Acheson and Doyle, have done with their budget to bring the church back to the original vision and design of Keely, and execution by the Famine-Irish boat wrights from the local EV community who helped build it back in 1848. They have restored the original brownstone facade, re-made the original windows, made beautiful replacement stain-glass windows (after the Archdiocese willfully destroyed the original hand painted windows in the summer of 2006, in an effort to show its strength and disdain for the community and hasten the demolition process).

The courts issued an injunction stopping the demolition pending the outcome of the case back then. They have painstakingly restored the interior and replaced the old rotting roof with a batten seam, all-copper roof. But they have failed to add back the original 50-foot high steeples on each tower, which could easily be done. And they will not restore the cast-iron fencing around the church — the exact same fencing used and still surrounding Grace Church on Broadway and 10th st.

This will be replaced with an aluminum fence the contractor assures is quite elegant. They did a slap-dash job on the facade of the rectory, quite beautiful originally. But they have done wonderful work supporting the rear wall of the building, the cause of all the structural trouble. It began peeling away from the rest of the church about 30 years ago after an adjacent building was demolished. They have restored and refaced with copper the Crucifix atop the church, and they will replace the original pentacles that were on each corner of the towers. However, they don't seem to be adding back the carved details along the top front ridge of the peeked roof and no one knows if they are planning to return the huge bronze bell removed for "repair" over a year ago.

Hope this helps clarify things a bit.
Posted by Grieve at 6:39 AM

Thank you so much for the update. I look forward to the completion of the renovation work on this neighborhood treasure.

Thanks very much for this. I'm sorry they did a slapdash job on the rectory, but the rest sounds really good! And I'm so glad it's not turning into condos or, y'know, an Anthropologie.