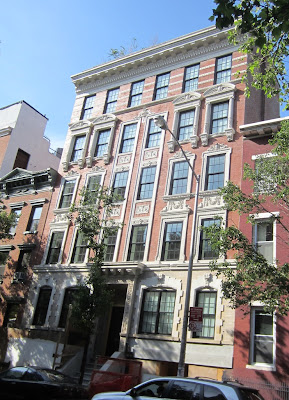 After a nearly two-and-a-half-year gut renovation, the Economakis family has moved into their newly created mansion at 47 E. Third St., Lincoln Anderson reports at The Villager this week.

In an e-mail to The Villager, Alistair Economakis wrote, "Catherine's and my intentions to make 47 E. Third St. our home were always true and genuine as is now evident."

The address was the site of a bitter landlord-tenant fight dating back to 2003. The Villager summarizes what transpired here — basically a handful of rent-stabilized tenants fought a lengthy battle to stop the eviction proceedings by Alistair Economakis who wished to turn the building into his private mansion.

Many EconoWatchers were skeptical that Economakis would ever return, choosing instead to flip the former 15-unit tenement building.

Meanwhile, City Councilmember Rosie Mendez tells The Villager that the Economakises are leasing part of the ground-floor space to a medical facility. Mendez also said that the landlord did not get the OK for a new curb cut for a garage to serve the medical facility.

More coverage here.
Posted by Grieve at 6:30 AM