On our post about 7-Eleven earlier this morning, a reader left a link to a new petition ... 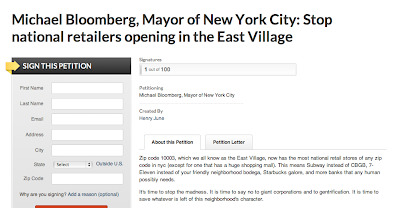 Zip code 10003, which we all know as the East Village, now has the most national retail stores of any zip code in nyc (except for one that has a huge shopping mall). This means Subway instead of CBGB, 7-Eleven instead of your friendly neighborhood bodega, Starbucks galore, and more banks that any human possibly needs.

Back in November, The Center for an Urban Future released its fourth annual study ranking the national retailers with the most store locations in New York City. The 10003 Zip Code, which includes Union Square and parts of Fifth Avenue, came in third for most chains overall in New York City with 169.

Meanwhile, you can find the petition here.

What about the 10009? We're the ones who need to stop the invasion before it gets even worse here.

Blame it on the sh*tty landlords that jack up the rent so high that only national franchises can afford.

I live in 10003 and have no problem with national retailers. Who cares? These companies are all based in New York City anyway, why can't they have stores here too? Move to Brooklyn if you don't like it.

THANK YOU!
However, I keep getting this error message
•There was an error submitting your form. Please try again later."

Can we please form a committe on this too? I would gladly join!

And yes it would be very good to add 10009... we are in a very vulnerable position right now.

My fault, glamma — I fixed the link from my site.

"These companies are all based in New York City anyway"


You really need to check your facts before posting


Also to the Anonymous above me- that's a terrible attitude. It's one thing to have a couple chain stores here and there and another to have a wide sweep that ruins any sense of community that's in a neighborhood.

People with that attitude show little insight on the importance NYC's originality.

Why do people come here from across the world to take a picture?

Not because they want to see some generic suburban bland municipality. It's because it's NEW YORK CITY, different and vibrant and something you won't see anywhere else in the world.

The issue that also cannot be ignored is the impact that taxes (and taxes and also taxes) have in these situations. Landlords increase rent in response to higher expenses in operating/caring for/whatever else, a building. National chains can take the risk and absorb a loss much better than a person/persons looking to keep open (or just to open) an independent business. This is not to say that this is the ONLY cause but it certainly plays a big role. And no, this is not an argument to suggest that all taxes are bad and should be abolished.

I would have to think that, aside from greedy landlords, the bad economy has to be a part of it. Landlords are gonna go for the sureshot: a corporation that will always have the money. The corporations are just preying off of everyone's uncertainty and lack of money in a climate like this.

Not saying that makes it okay; just that, although the "gentrification" seems to be happening at increasing rate lately, there are more aspects to it than a generation that just doesn't care about anything "real"...

the economy is actually very good for some people... like RICH CORPORATE CHAINS WHO DONT PAY TAXES

i keep getting the same error message

I signed the petition! Let's save our neighborhoods :)

well, yeah, that was kind of my point. they spread like wildfire when there's an economy in which most people need to buy things at the fifty cent or dollar cheaper price that these corporations can afford to sell things at for the savings(or at least the perceived savings due to relentless pr and advertising by these corporate entities; i'm sure it's not always accurate).

How many locally-owned bars, cafes and restaurants have been shot down by the community boards?

The short-sighted selfishness of the NIMBYs who can't abide the ordinary noise of the east village, all the while decrying how it's lost its edge from days of yore, is easily as much to blame as the crappy landlords. The CBs can only shoot down liquor licenses, which in many cases were unfortunately going to be locally owned and operated.

You are reaping what you have sown. And we are all the worse for it.

A false dichotomy. In fact, the petition is itself the vehicle for escaping such a false choice: if we have NIMBY's denying liquor licenses AND a ban on national chains like in the UWS, who then can afford astronomical retail rents? And so the rents must fall, allowing mom and pops to survive.

Just Say No . That's all you really have to do. If you don't shop or do business at these places, they will fold up. It's simple really.

> in the earlier EV Grieve piece, you state that zipcode 10003 is ranked THIRD.

> Zipcode 10003 is ENORMOUS! From 20th Street down to Houston, First Ave to Fifth, roughly. (If we were to look at the stores on a map, I'm sure we'd see that that the heaviest concentration of "national" stores would be WEST of Third Ave.)

From these facts, our petition writer comes up with this intentionally-inaccurate opener: "Zipcode 10003, which we all know is the East Village, now has the most national retail stores of any zip code in nyc...."

(The most important rule of any successful illusion: First, the people must want to believe in it.)

Anonymous (1:41 pm), you don't think there aren't national chains in Brooklyn? Ha ha. Drowning in them.

Why is the choice posed by anon above either bars or national chains? Deciding that the EV is going to rival Times Square as THE tourist destination for nightlife is a huge one, but that's what we are getting, no matter what you think about the approvals process at the community board. Despite denials, this industry has grown by HUGE leaps and bounds in the EV and LES.

A broker told me that the reason they want chains isn't necessarily higher rent, but they can easily get credit to pay for building out the space, plus the corporation guarantees the rent even if the store isn't profitable. He also said that keeping the store empty could cost them 5 times the lost rent if they rent it to someone who fails. Don't know how true that is.

The CB is having some lively discussions about this issue, and if anybody is truly interested in acting instead of complaining, there is some very real work that needs to be done on this issue.

After meeting some of these people I have guarded hope, but only if the CB follows through and can come up with a realistic plan.

I love gentrification but would prefer the higher end chains take over the east village.

I hate that there are so many corporate sympathizers among us. It's one thing to suckle the teats to get at your slurpees and crappucinos and five-dollar footlong subs and what ever kiddie snax you are hooked on but when you start mewling at others for opposing corporate encroachment you have entered a whole nother level of slavishness. Newsflash: your thoughts and desires are not really your own anymore.

Anon: It's not really a false dichotomy. Landlords want what rent they think they can get. Restaurants and bars (and some cafes) can afford the higher rents. If a restaurant owner's process becomes prohibitively expensive and time-consuming, they'll take their operation elsewhere. Or not even try. Unfortunately the Rainbow and Unicorn shops you seek can't pay those high rents. I wish they could.

The East Village has become a victim of its own popularity. The difficulty in this endeavor is that people want a boycott-like action against the chains. But boycotts only work in a transaction where the boycotter is a party to that transaction. The transaction in this case is between the landlords and their tenants. The landlords don't really give a rat's ass about whether you shop at the chain.

I'm no happier than anyone else about the proliferation of chain stores in NYC. And I'm certainly no friend of a greedy landlord. But people need to think long and hard about rejecting a viable business simply because a) some cranky shut-in who lives upstairs doesn't like it, or b) you want a restaurant that serves something other than thai food on that block.

Unless you plan to open your own business in a particular spot, you (we!) simply don't get to pick and choose based on our own whims who's allowed to engage in a retail lease transaction!

Let's do whatever we can to protect New York for residents, not just for tourists and moneyed transients.
Bloomberg will sell us out to the last cent he can scrape of our fraudulently evicted mothers' backs... The time to be defensive is NOW.

not sure where most of you grew up, but many of the folks who grew up in the east village and the rest of new york grew up on mickey D's, BK, arthur treachers and the like, not on Ninth Street Espresso, yoga studios or craft shops. The hypocrisy on these pages is palpable.

Anon 12:41 you are right that NY has never been completely void of the franchise restaurant, but the proportion was very different. Even if you ate at them all the time, there were still all the Polish restaurants, diners, delis, pizza places and etc to choose from, even if you didn't frequent them, they were definitely here.

I spent a lot of time trying to steal candy from CVS and savoring the chocolate shake at mcd's, but there was still the $2.75 breakfast special on weekends.

Now that I write that, it does seem that with the invention of the dollar menu, the proportion of mcdonalds to pizza has remained the same if you don't count the outliers with $1 or $5 slices. Off topic, but I'll throw it in.

NYC used to have very very few corporate chain stores. I grew up here and remember that a huge part of the excitement of coming into the Village was the fact that there were stores here that you did not dee at the mall or anywhere else. Of course there were a few stores like MCD's but they were few and far between- now B'way looks like the mall- what's the point?

If the East Village or (name your neighborhood here) were in San Francisco instead of New York City, our mom and pops would get some support from the zoning laws. SF is the first large city to have restrictions on formula retail and restaurants--it was passed in 2004. If a formula business wants to move in, it must be approved by the Planning Commission on a case-by-case basis.

I think this is a better way of protecting local businesses than the recently proposed zoning on the UWS to limit the size of storefronts. Good article on the SF ordinance here: http://www.ilsr.org/rule/formula-business-restrictions/2321-2/