Maiden Lane coming to East 10th Street and Avenue B 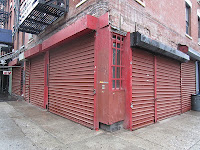 We had the scoop last month on what would be taking over the former Life Cafe space on Avenue B and East 10th Street — a cafe/restaurant serving beer and wine with the working name of Yardbird (out of homage to Charlie Parker). An alternative to the woo.

Eater learned yesterday that they new place will be called Maiden Lane. (An homage to where the Federal Reserve is located in the Financial District?)

As we noted, the partners are Nialls Fallon and Gareth Maccubbin, East Village residents with restaurant experience at two popular Mulberry Street eateries. Fallon was the general manager at Torrisi while Maccubbin held the same position at Torrisi spinoff Parm next door.

The pair were granted a beer and wine license at last month's CB3 meeting. They plan to serve a regionally sourced food menu that compliments their white wine and sherry-heavy beverage list.

staying optimistic about this one, but MAIDEN LANE? come on guys..... that's the best you can do? Ooof.

Are you kidding me glamma. These people like to shove it in your face. Vomit!

I THOUGHT THEY WERE GONNA CALL IT CHARLIE'S after CHarlie pArKer!
wtf would you name an east village restaurant after a dismal street in the financial district?? sounds so douchey too.
come on dudes, don't do it ahhhhh....