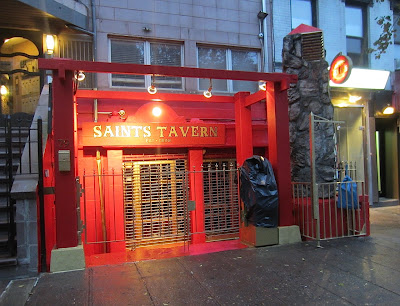 The Typhoon Lounge closed back in May on St. Mark's Place just west of First Avenue. And now the bar that is taking its place has revealed itself  — Saints Tavern.

The proprietors went before the CB3 back in August to to open a bar and "American grill." They previously were licensed for the bar The Brews Brothers on Second Avenue in Yorkville from January 2009-2011. 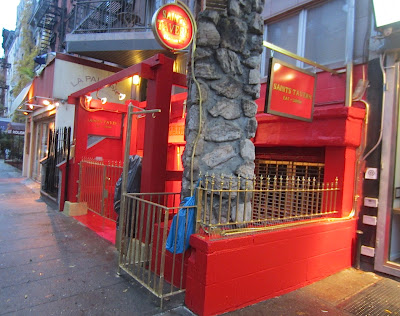 that just sucks. typhoon was the best joint on this block. another douchebag transplant gathering spot in the EV, amazing.

Looks like they're copying St. Dymphna's, similar to 12th street Ale House being a copycat to McSorley's

and/or trying to confuse newbie patrons looking for St. Dymphna's.

The paint job is awful. Bright red with gold spray paint all over the place. Before the sign went up I thought it might be a dim sum joint.

hope they fail miserably in their role in destroying the artistic and culturally progressive roots of our hood!

What's the building above it, a prison?

They've put anti-bird spikes all around the sidewalk tree box and along the wall facing the noodle shop next door. There's no pigeon problem there at ground level so guess they're trying to "stake" out their territory. Total eyesore.

I live in the area and saw this new place and decided to give it a chance. It was a good choice. I was greeted immediately and felt right at home. The bartender and the waitresses were really cute and sweet. Had some cheap drinks, good food and amazing company, Would definitely recommend this place.

I don't understand all the negative comments. Tried this place over the weekend, and it was great! The staff was very knowledgable, and made me feel welcome.

yew. It's starting to smell like fake Yelp reviews in here.