In our post last week on the one-year anniversary of Tompkins Square Bagels, owner Christopher Pugliese said that he'd love to open an old-fashioned Italian-style pork store/market in the now-empty space next door. The comments were overwhelmingly in favor of such a concept.

Diablo Royale Este closed at the end of August after some ongoing issues with the State Liquor Authority (among other things — the bar has long drawn the ire of neighbors since it opened in May 2010).

The space at 167 Avenue A had been on the market for months. However, a sign just went up here at the end of last week. 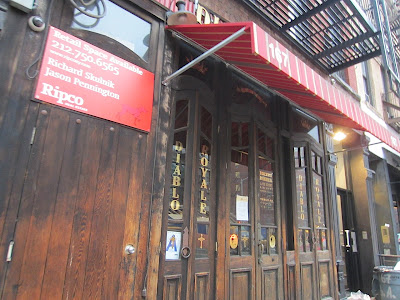 It's a big space — 4,000 square feet. There's isn't any mention of rent. However, the listing includes these "notes and highlights:"

400 sf backyard for seating (permitted to be open until 10pm on week days and 11pm on weekends)
Legal lower level with bar and seating
2 year-old kitchen and equipment
Full 4 am liquor license.
Occupancy for 150 people.

As much as everyone likes the idea of a market here — something people in the neighborhood want and need ... given the almighty valuable liquor license attached to this, the reality is we'll likely get stuck with another horrible bar that no one wants and exclusively for Weekend Woo-rriors from afar.

It's just another Saturday night on Avenue A
Posted by Grieve at 5:55 AM

According to the SLA website they do not have an actice license to transfer. They lost ot for bad behaviour. They shouldn't be advertising that someone can buy their license & operate as they used to.

Good point... I wondered about that...

A pork store would be awesome!!!! No more chains please.

Their license was reinstated last I heard. They were serving up until their last day open. I've heard they are asking a ridiculous $17k a month for the space, which would of course rule out a pork store.

I wish someone would open a Sweeny Todd-like bar and thin the herd.