Bikes, By George! — now as a sidewalk shop 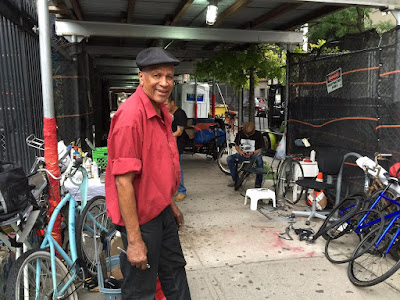 As we reported earlier this summer, a rent hike forced George Philbert to close his bike shop at 193 E. Fourth St. just east of Avenue A. (The landlord doubled the rent, according to George's partner Dash).

However, after a short break, George is back with a pop-up shop of sorts. According to EVG regular Greg Masters, George sets up each day on the sidewalk on the north side of East 11th Street between Avenue A and First Avenue (by the school playground).

Before East Fourth Street, George had a shop on East 12th Street between First Avenue and Avenue A from 1979 to 2008. George has been repairing bikes in the city since 1970.

Previously on EV Grieve:
Rent hike will force Bikes, By George! to close on East 4th Street
Posted by Grieve at 4:21 AM

Email ThisBlogThis!Share to TwitterShare to FacebookShare to Pinterest
Labels: Bikes by George

Forty-five years of working in the neighborhood and he has to work from the street while dozens of neighborhood rental properties sit vacant... or convert into artisanal coffee bars! Ugh!

Too bad this man can't get a box truck and set up shop there, that way he won't be subject to tickets from police. I hate what is happening to the city! Current landlords are job killers!!

Heads up, my neighbor who is a known bike thief and been arrested for it numerous times is also selling his bikes along this stretch.

I am worried George is going to get ticketed for doing business on the street.

Mr Philbert ( GEORGE from bikes by George) is one of the hardest working persons I've ever witnessed! To have his shop shuttered by greed is honestly more of the same for this neighborhood.. this is an epidemic of greed! there should honestly be a "war on want" as Greed rolls over SOOoo many local small biz folk.. it is common place!
When does a building owner step forward and assist such folk?
NEVER cause greed is the ugly seed that is common place today!

FYI Mr. George is working from a "permitted" space as the flea market that goes on SAT an SUN ( eleventh st. offa First ave) covers his presents during the week... He is covered by the flea market permit to be by the school. FACT!

The allegation that another party is offering "dirty" bikes ie stolden is totally unfounded likely a malcontent writing BS to disturb Mr. Georges HONEST efforts to have a continuum in his beloved bike trade...Some folk are plain nasty !
Gee leave the guy ta his work already! such drama is ugly.

My wife an I totally support George and are honored to still have George working on our bicycles. Hang in there Mr. George you are a great man!