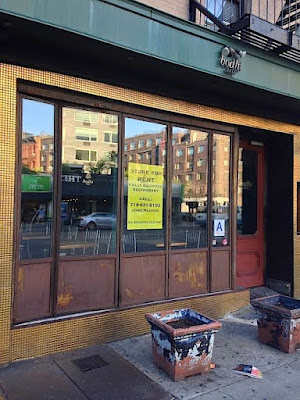 The Thai restaurant at 58 Third Ave. between East 10th Street and East 11th Street shut down late last week … and a for lease sign has already arrived in the front window.

The proprietors ran two other places in Brooklyn, both of which are closed now as we understand it.

Bodhi Tree opened in the spring of 2009 … the space was previously home to the worst Taco Bell in America.*

The building at 58 Third Ave. remains on the market. The listing notes that "the building currently has 6,308 sq ft, but an additional 4,786 sq ft. may be added."

* Blanket statement
Posted by Grieve at 4:15 AM

Email ThisBlogThis!Share to TwitterShare to FacebookShare to Pinterest
Labels: Bodhi Tree, restaurants that are now closed

Another one bites the dust...

Man I still miss that Taco Bell, it was so narrow and claustrophobic but you could get your 7 layer burrito and eat in in peace without having to risk your life in the 14th Street location whch is like the mess hall on Rikers.

I agree with the first comment. Liked this place. The proprietor was always there, working hard. He told me about the work he put into transforming a Taco Bell into a pretty place.

I'll just add this to the list of all my standbys and favorite restaurants or bars that have closed due to greedy landlords (never because of lack of business).

It's got to the point that we joke about liking a place because it's almost the kiss of death.

Aw, man, this was our favorite Thai in the EV. Solid classics with legitimately spicy dishes, too. We ordered from here about once a week, and it always seemed crowded... Say it ain't sodhi, Bodhi.

What the hell? This place was AWESOME, and always packed. There has to be more to this story.