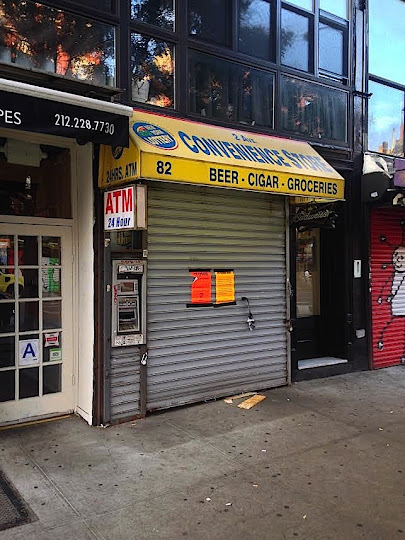 Several readers told us about it, though we didn't know the extent of the allegations.

The notice on the gate points out the following activity on the premises: Sale and possession of synthetic marijuana/Stolen property offenses… 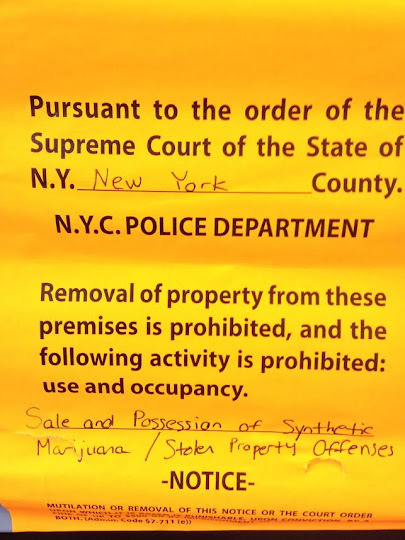 The other day, an EVG reader came across about 50 pages of court papers (since removed) that were lying on the sidewalk out front... the reader skimmed about five of the pages, noting a sting operation involving stolen goods.

We went online to find the case. 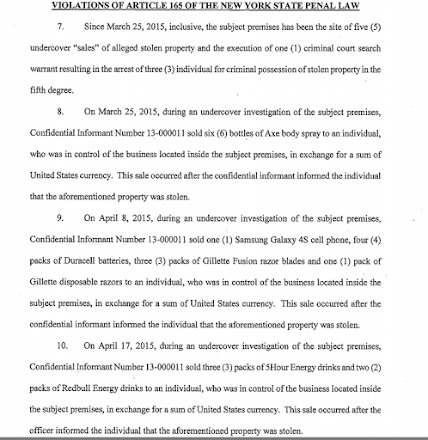 The court documents outline the violations, which include that the store was the site of five undercover "sales" of alleged stolen property since March 25. In each case, "the sale occurred after the confidential informant informed the individual that the aforementioned property was stolen."

According to the settlement, the store had to agree to a whole bunch of legalese and pay a $6,000 penalty ... but it appears the owners will be able to reopen this week.
Posted by Grieve at 4:20 AM

That store has been there for a long time. Someone in the restaurant next door told me a new owner recently started working there.

What the store owner did is wrong. At the same time it seems like the NYPD went to a lot of trouble to bust someone for buying a few packs of razors and batteries.

Selling stolen property is wrong, but selling synthetic marijuana is not wrong and should be within the owner's rights.

but selling synthetic marijuana is not wrong

Selling synthetic marijuana is illegal and has been for a number of years.

Is it really possession of stolen ax body spray if said property was given by NYPD to some rat lowlife to pretend/lie about that it was stolen and sell? It never was really stolen property in the first place... Just a plant or a prop.
Or does the NYPD hire these "people" to steal stuff and then sell it? That seems absurd.
But then again, so does a sting involving many untold hours and dollars to bust a fence for hygiene products around the corner from the men's shelter.

This is why I buy my Axe body spray by the case at Costco. I can't trust my local stores anymore.

"Synthetic Marijuana" is not safe. There are been reports recently of young people going through psychotic periods after using these drugs. This stuff contains dried shredded plants and chemical additives which mind-altering effects. Teenagers are the biggest victims of this scam due to its cheap price and availability. If you don't believe me go to this US government website and read about it.
http://www.drugabuse.gov/publications/drugfacts/k2spice-synthetic-marijuana

So in this neighborhood we got synthetic marijuana, artisanal non-psychoactive hemp products, and medicinal marijuana pills. I.e. everything but the actual good stuff. What a bunch of tools we are.

I could've used that phone. My fucking screen just cracked!

Even if synthetic marijuana is unsafe, it should be within a person's natural right to use it. Cigarette are unsafe too, and deadly for that matter, but there's no law against using them, and rightly so.
As for their "illegality," get rid of that statute. Ignore it in the meantime, as per Albert Jay Nock's essay, "The Right to Ignore the State."

So Anon@ 1:19 PM, to whom do you think should these merchants be allowed to sell their poison?

"There is controversy about calling Spice and K2 synthetic cannabis. "Synthetic marijuana" is a misnomer according to Lewis Nelson, MD, a medical toxicologist at the NYU School of Medicine. "It's really quite different, and the effects are much more unpredictable. It's dangerous, and there is no quality control in what you are getting."

Do the sellers verify that the buyer is an adult and thus presumably able to consent to ingesting K2?

"Professor John W. Huffman, who first synthesised many of the cannabinoids used in synthetic cannabis, is quoted as saying, 'People who use it are idiots. You don't know what it's going to do to you.'"

I have no problem with this shut-down. Willfully and knowingly sell stolen goods, get your store taken away.

It's insane to me that people are condoning selling stolen shit just because they hate the NYPD.

No one condones selling stolen goods. Read my original post.
What the government doesn't have a right to do is to prevent people consuming whatever they want. The right to life implies the right to consume whatever one wants. Anyone also has the right to commit suicide.

Where can I sell my food stamps for cash and beer now? This sucks


Synthetic marijuana has nothing to do with real marijuana--it is often called k2 and is any mix of chemicals that is attractive to people without money because it is very cheap. I have seen people on this drug and it is not pretty and certainly not fun for victim. Selling this drug is showing profound disdain for a person's health and well being. It is in no way linked to marijuana.