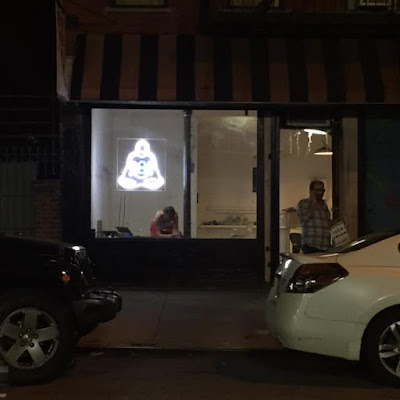 During the weekend, EVG reader Alexis noticed some activity in the retail space that Bikes, By George! previously occupied on Fourth Street just east of Avenue A… a sign then arrived in the front window noting "Psychic coming soon." 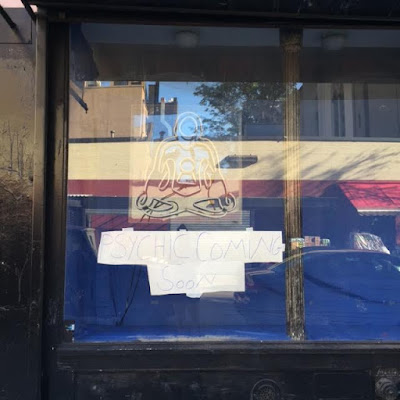 George Philbert closed up his 7-year-old shop here at the end of June. He told customers that he couldn't afford the new higher rent. I do not know what he was paying, but, according to the listing, the asking rent is $3,750 monthly for 340 square feet.

These days you can find George selling bikes on East 11th Street between Avenue A and First Avenue.

Email ThisBlogThis!Share to TwitterShare to FacebookShare to Pinterest
Labels: Bikes by George, psychics

Psychics are not real.

I all for some fantasy entertainment as most people (those lord of the rings movies) and I know some people need someone to talk to about their concerns and ask for advice but when people are lied to and separated with their life savings I put this form of entertainers into the category of con-artist and criminals. Just saying.

Has there been an exposee on these fronts? What do they do??? Money laundering??

People should read Joseph Mitchell's "King of the Gypsies" and "The Gypsy Women" (from Up In The Old Hotel). Very interesting stuff, and lots of details about how psychics operate.

So the psychic knows something that George didn't? :-)

there used to be a few psychic storefronts on first avenue
i guess it will be like froyo and dumplings, a second will come and they will reproduce

sometimes entire families move into these storefronts
sometimes just one

Nice job Mr. EV Landlord, you push out a bike shop that many people in the neighborhood rely on for affordable repairs, and you immediately bring in a psychic that will most likely prey on vulnerable people looking for magical solutions to all of their problems? If landlords could rent their stores out to heroin dens, even the chain stores wouldn't have chance.

NY Times just had an article on this:

Why would any landlord rent to a "psychic" given that psychics are infamous for paying rent for a month or two and then needing to be evicted?

I want to give the landlord a big "FUCK YOU" for evicting someone who actually contributed to the community to replace it with a leech, someone who preys on the gullible and does not contribute anything.

It's a shitty corner on shitty block. Totally derelict.
It's exactly as I would expect.

NY Times just had an article on this:

Why would any landlord rent to a "psychic" given that psychics are infamous for paying rent for a month or two and then needing to be evicted?

Best quote from that article: "It's a scam, sir." (Actually the title of the article.)

This will not end well for this building. If you know anything about the Bible this is a great SIN

Similar to this blog, helping the old East Villagers sadly accept the destruction of their community by the new landlords, is the Gypsy King who helps the psychics' marks accept the catastrophic loss of their savings ...

Can someone explain to me how a psychic can make enough to afford that kind of rent? There's gotta be more to it behind the scene?

I see a market rate apartment in your future ... or maybe a homeless shelter ... it will cost more for me to be certain of which ... said...

and then there's this one:

But don't worry, she's probably moving in just to convince the remaining rent-stabilized tenants that their apartments are cursed. They'll pay her to help them terminate their lease with the landlord whose greatest hope is to continue to feed on their weakness as evidenced by their penchant for remaining in a below market rate apartment. Then they will be free.

What do you call a midget psychic who escapes from prison? A small medium at large.

Aha! I knew you were going to say that!!

Oh Giovanni, your too funny!