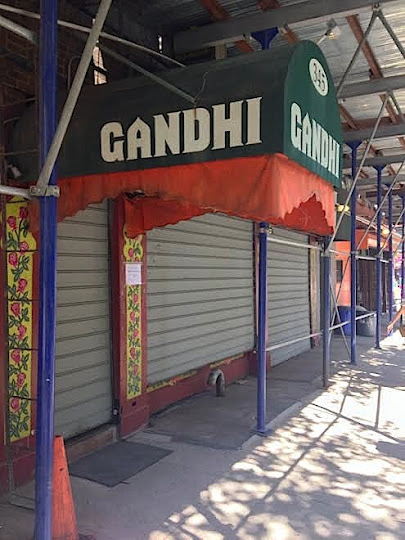 We saw that the gate was down this past weekend at East Sixth Street anchor Gandhi ...

The sign directs people to go to Haveli Banjara around the corner on Second Avenue... 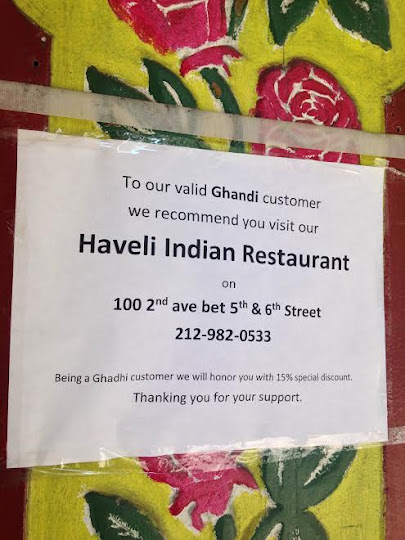 Turns out that this is a permanent closure here at 345 E. Sixth St. just west of First Avenue. A staffer at Haveli confirmed to EVG reader Michael Hirsch that Gandhi has closed for good, that a rent increase pushed out the restaurant.

Gandhi, which opened in 1984, is the second longtime Indian restaurant to close this year on East Sixth Street because of a rent hike. The 42-year-old Mitali East was Cromanated back in March.

Both Gandhi and Mitali East directed their customers to Haveli, just like Banjara did in 2013.
Posted by Grieve at 4:21 AM

East 6th btwn 1 & 2nd aves is becoming a ghost town. More than half of the restaurants have shuttered in the last couple years. Is Schwimmer secretly pulling the strings behind it all?

Little India is almost completely gone now. Every Indian place on the block that closes down is sending their old customers to Haveli, which looks like it will be the last one to survive the East Village's version of Ten Little Indians. And then there was one...

I loved this restaurant. This city is sucking really hard as of late. Every eclectic restaurant, bar, shop that makes this neighborhood special has been obliterated by greedy landlords. So now we'll have yet another vacant storefront? It's like watching all of your friends and family die one at a time.

Oh no. I have been eating here since I first moved to the city in 1990. I am sorry to hear it has closed.

I'm with you, Notorious - its just depressing watching your favorite stores, bars, restaurants all close and be replaced with chain bullshit. And watching your neighbors be replaced by 20 somethings who work at Facebook or in Finance and all have way more money than you do (and nothing interesting to say or contribute).

I think I am done here - heading up the coast in a couple of weeks to CT, RI, and MA to check out small towns on the coast to start again. I can't stand living in a place where every day I am told I am not rich enough to be here.

Gandhi is merging with Haveli? Just how many employees will Haveli have? This is the third restaurant to "merge" with Haveli. Unfortunately Haveli is no longer the great restaurant it once was. These "mergers" only look to hurt Haveli...and we don't believe it anyway.
D. Moe...sure, right, Schwimmer is responsible. What is wrong with you? Why are you so indignant that Schwimmer lives among us? We should be pleased to have a property owner that actually cares about the neighborhood and the people. If you want to blame someone for your problems...take a look in the mirror please.

Every generation that's come to New York has brought their own culture with them and that variety is what makes the neighborhoods so special. They also moved here to BE New Yorkers.

Millennials mistake shopping and consumerism as culture because marketers use the words "curated" and "experience" and package it all in childlike, flat design with little squirrels selling them shit they can't afford at a premium. Generation Broke yet they have money to buy curated meals and ingredients delivered to their apartments because they can't do simple things like buy groceries. Babies. And now landlords kick out restaurants for Millennial friendly, infantilized corporate garbage chains. Baby want a fro-yo?

Shopping is not culture. Brands are not your friends. They're all a bore and the sooner they move on to the next kidult friendly, handcrafted, curated, delightfully sanitized city, the better.

NYC has been changing for hundreds of years. In sure you and the places you loved replaced something else that people missed. Good luck with the small towns. I know people who tried that. Driving around during winter is fun. So is shoveling snow and being in the middle of nowhere.

"NYC has been changing for hundreds of years. "

This line, usually used by a recent REBNY transient troll (but not always) in defense of the hyper gentrification of NYC, is such BS I don't know where to begin. Again, Blooomturd and Burden rezoned 40% of the city during their recent 12 year reign of terror.

NYC has been changing for hundreds of years but never has it been so drastic that businesses turn over every six months. People had an interest in stabilizing neighborhoods and local economies, not destroying them.

Did someone say my name! Pardon my absence, I've been working diligently on a plan to pave over the East River to add more places to sit and enjoy a coffee. With free Wi-Fi of course!

Anon @ 11:19 is half right. NYC has been changing, and those who grieve over the loss of the familiar were the vanguard of a movement that supplanted the old. That's the funny thing about people bitching about gentrification; usually they're wholly ignorant about the part they played in the whole scheme. 'Oh, what happened to the artists? They unique characters? All of the people like meeeee?' Well, you were the first wave, knucklehead. Unnastand?

I'm sympathetic to those people who long for "stable" neighborhoods. But hope is a carrot and change is a stick. Enjoy your switchings, dearies.

On the other hand, there ain't a goddamn thing wrong with shoveling snow. A little honest labor would do you spindly armed muppets some good, I think.

You know, Haveli used to be my favorite restaurant in the EV, and as someone pointed out they've undergone a steep decline in quality of the years.

That said, the restaurant business is tough anywhere. I have food and a kitchen and the ability to produce dinner at a far lower cost than if I were to eat out -- that's every restaurant's competition. Not to mention having a large population of transients (not crusties!) makes it difficult to foster a steady clientele amongst the smorgasbourg of competing offerings. The turnover rate in the neighborhood is staggering but not unexpected.

Shovel snow?! Is there an app for that???

The Indian restaurants on East 6th Street were never that good. The best ones are the two on First Avenue, with all the lights, and the lights are the reason they're better.

Michael Jackson was a kidult. That's your future. A 50 year-old in feety pajamas.

Ghandi was my go to Indian restaurant in my hood. The food was consistently good, the prices fair and the staff always nice. Them and Rose of India. Sadly, both are gone now. Where the hell do I go now for good affordable indian food??? NYC is totally turning/turned into suburbia…and people that come along with that suburbia don't really care for indian food or culture, for that matter, right? I m a born and bred New Yorker and SO disgusted with what is happening in our city now and globally for that matter, with the rents, commercial and residential. Big chains. What happened to the monopoly laws? Ugh!

I don't know people, middle of nowhere sounds pretty good right about now. Middle of nowhere in 2015 is way different from middle of nowhere even in 1985. As long as you have high speed internet you're set. You are never truly alone. You got your Hulu's and Netflix's and what not, keep you up to date with all the latest shows and movies and news that people in New York are talking about. You got Facebook to keep tabs on your family and friends. You got EVgrieve.com! Come to think of it, we are all insanely connected to our fellow man, in ways and degrees that previous generations probably never dreamed of. If ever there were a time to get away and find a home with less population and some elbow room, it is today.

Lynne, the building super, told me the Indian restaurant closed due to the owner's health problem. He had open heart surgery a month ago, and decided to retire. Maybe there was a rent increase, but that wasn't the key issue.