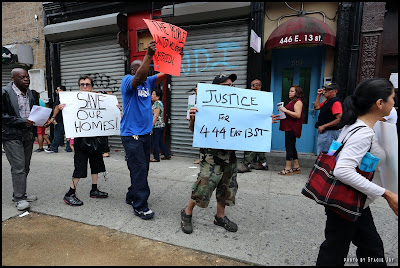 Let's get right to the Daily News with the story:

Aaron Jungreis, one of the top building sales brokers in New York, is suing Raphael Toledano, his nephew, for allegedly agreeing to form a joint venture with his uncle to acquire the buildings, then going behind his back to buy them himself.

Jungreis accuses his nephew of being “motivated solely by greed” and says he mentored him in the real estate business for years and shared his network, only to be cast aside when Toledano felt he could go it alone.

The lawsuit is over a 16-building portfolio in the East Village owned by Morton Tabak & Co. (The sale has not yet hit public records.)

As for that portfolio of buildings, The Real Deal lists them as the following:

It has been a busy legal year for Toledano. In May, rent-regulated tenants at 444 E. 13th St. filed a lawsuit against Toledano and his Goldmark Property Management for "deplorable conditions" as well as for alleged ongoing threats and harassment.

On Monday, the Daily News reported that state officials have launched an investigation into Toledano following the accusations of strong-arming tenants into giving up their rent-regulated apartments on East 13th Street.

Meanwhile, in the East Fifth Street buildings that are reportedly part of the sale, a resident claims that Toledano has already been visiting the properties even though the sales haven't been finalized. According to the resident, Toledano will introduce himself as Rafi, Ralph or Raphael.

The East Fifth Street resident also claims to have recently witnessed the following:

Arriving in a convoy of three black SUVs in the morning or evening, [Toledano] has been hanging out on the street, asking tenants if he and his entourage can enter their apartments. Others he shadows to or from their apartment house entrances with accusations that they "should not be living in rent-regulated apartments," that he has had them investigated, all the while referring to specifics on their Facebook pages.

Residents here have been in contact with GOLES and The Urban Justice Center.

Does anyone know the situation with is buildings at 510 and 514 East 12th Street? I have heard that one of them--I think it is 510--is full of empty apartments. Is that true?

I thought it was the Mos Eisley Spaceport that was supposed to be the most wretched hive of scum and villainy ever. I see it's really the EV, thanks to this new crop of demon landlords that have spawned since NY real estate became attractive again. Oh, lucky us.

This is rich... A real estate broker accusing someone of being "motivated solely by greed".

That's pretty much the job description, no?

510 East 12th Street is not at all empty. I live there and as far as I know most, if not all of the apartments are occupied.