At NatureEs, the Mars Bar replacement that apparently is no longer open 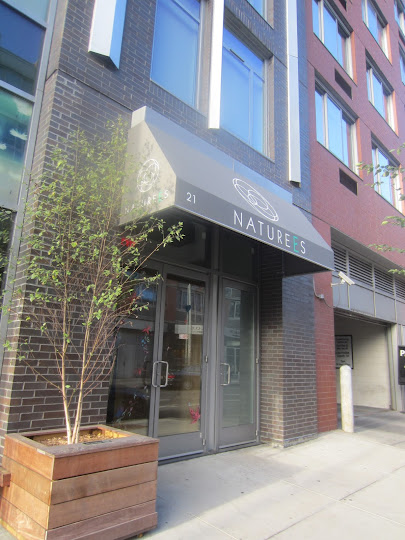 There hasn't been much, if any, daytime activity over at NatureEs, the juice bar/cafe/"wellness center" combo at 21 E. First St. in Jupiter 21, the residential building that rose from the grave of the Mars Bar and several other businesses here between Second Avenue and the Bowery.

Former Mars Bar owner Hank Penza was reportedly a partner in this new venture that included a founder of Juice Press.

The cafe space was seemingly cleaned out about a month ago… the doors are always locked during the announced business hours… for at least a week in late September, there were signs on the door noting a closure for a private event... 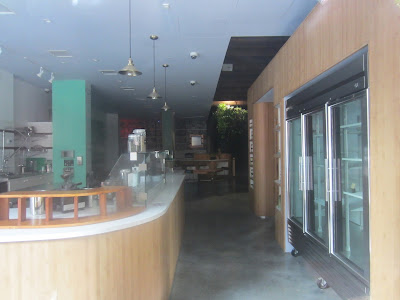 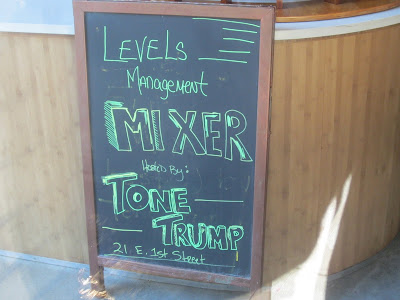 Out of curiosity, I stopped by NatureEs twice during its run … once right after it opened this past May. There was a disorganized vibe to the place, though you may expect a little chaos shortly after opening.

NatureEs actually didn't have much for sale in this huge space — six juices … a chia bowl. The (presumably?) manager, who treated me like an undesirable party guest, said they were making smoothies, but they didn't have menus yet. They also had hot soup — a lentil bean concoction, which seemed a little much on this unseasonably warm May afternoon. They had two small to-go dishes. The chia bowl and a broccoli/cauliflower mix. Neither item had the ingredients (nor the price) listed. The vegetables had a sauce, but no one knew what it was. Also, the AC wasn't working.

I returned later in the summer, when NatureEs looked more inviting… 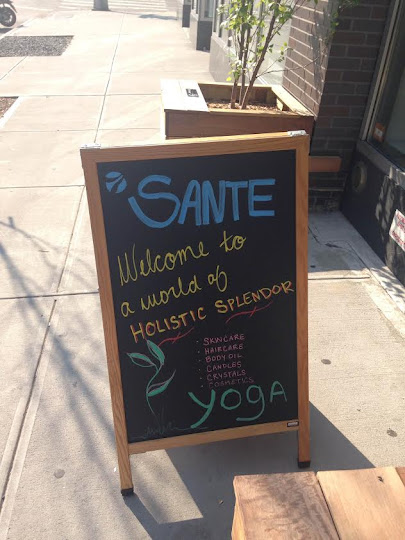 I looked around the well-appointed space … I was the only person there, other than the lone employee… 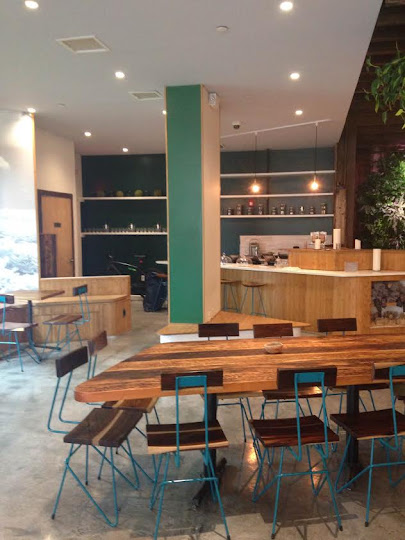 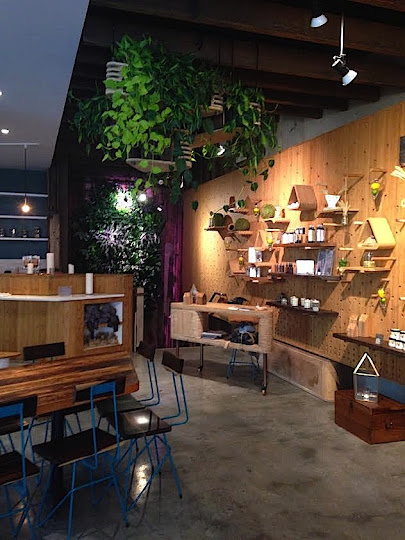 Eventually I decided to — in the name of blogalism — fork over $11 for a smoothie … the Starter Wife, featuring avocado, pineapple, spinach, ginger and coconut water, sounded appealing (enough). 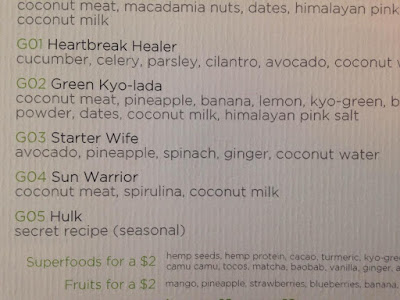 The employee said of course, and disappeared into the back room. He returned several minutes later with a sheepish look and the news that he did not have any avocados on-hand to make this smoothie. Maybe come back?

Yesterday, CB3 released its roster of meetings for November, including the SLA committee meeting set for Nov. 16.

Among the items on the agenda under alterations:

So it appears there are plans to convert the juice bar/spa into a bar-restaurant.

Previously on EV Grieve:
NatureEs calls: About the organic cafe coming to where Mars Bar 2.0 was in the works

A quick look inside NatureEs, the new organic cafe coming to 21 E. 1st St.
Posted by Grieve at 4:10 AM

Incredibly honest and objective reporting about what I expect is symbolic about some of these quick business schemes that are not well thought out. SO what replaced a much-loved and well utilized bar is now replaced with a clueless over-reaching mythological endeavor under the umbrella of "betterment" and "wellness"... More like the satisfaction of greed and ego over a solid business plan and people who truly have a vision for the neighborhood and a commitment to the community. Things have been moving too fast and new businesses are having trouble gaining a solid foothold. And many of these flops, I expect, have troubling stories behind them about people who squandered the cash and ran/walked away.

Grieve, you have summed up perfectly today's EV in a microcosm. This is what happens when landlords rip out the soul of a neighborhood and try to replace it with a bland, generic, money-grubbing "concept." The only concept real people are interested in is something that is real, not a ripoff joint with $11 smoothies with way too cute/sexist names. Not something that looks like a bad movie set. Did they really think they would get a bunch of idle rich yoga babes to hang out in this half-baked money drainer? Places like this reek of 'Welcome to our cool wellness spa/cafe/bar/whatever. Exit though the gift shop."

How a former owner of Mars Bar could be involved in this kind of shitshow is mind-boggling. First a juice bar, then a wellness center/lounge/club with bouncers, now a Spanish "bistro?" Sounds like they are trying to be another Rosie's, another soulless and inauthentic place that has managed to draw the Yelp crowds. And of course they are adding another bar. Ironically Mars Bar is going right back to its roots, munfortutnatey the forest has been paved over and now nothing that is native or authentic can grow there.

Why is it that eating nutricious foods needs to be marketed with a lot of new age hocus locus? Eating well is science and aroma therapy candles are just an up sell. As for this place, from my observations the people that walk around sucking one of these $11 drinks while texting prefer chain versions in where everyone sits around in yoga pants.

EVGrieve, Did you identify yourself to the manager? They probably know they type of "reporting" this blog does, and didn't want to help you undermine them. Which, as it turns out, they didn't need help in doing, I guess.

surprise!
juice bar to expanded bar
who would have thought of that

I see a cat cafe in this site's future.

@ 9:24: He needn't have identified himself to anyone. He reported as a regular customer going in off the street. You cannot "imagine" the place is dead, has zero help because there are zero patrons, or THAT THEY CANNOT EVEN DELIVER ON THE OVERPRICED GOODS THEY ARE TOUTING ON THE MENU BECAUSE THEY ARE NOT EVEN FULLY STOCKING THE INGREDIENTS TO MAKE THE ITEMS ADVERTISED. That's just pathetic, and it speaks miles about the fact that nobody was eating there. That is not bias reporting; even if he had identified himself, THEY STILL COULDN'T DELIVER WHAT THEY WERE ADVERTISING. LOTS OF WHAT GOES ON HERE IS SMOKE AND MIRRORS.

This is the type of place I would hang out in, all day long.
If I lived in Minnesota.

I dunno about anyone else on this site, but somehow a nightmarish concoction of "cucumber, celery, parsley, cilantro, avocado, coconut" and God knows what else would not have healed any heartbreak that I ever had. It sounds like someone took darts, threw them at a list of fruits and vegetables, and enshrined the resulting combo on their menus with a stupid name. That surely speaks to the level of professionalism and commitment these scammers possessed.

Say what you will, even empty this place is better than the filthy Mars Bar.

Thanks for taking one for the team, Grieve! Sounds like you were, quite possibly, the only customer of this place. So sad. Say what you will about Mars, but it brought life to this now-dead corner.

@ Gojira- Ha! Not even real darts! Probably those kid-safe round velcro-y things!
@ Anon 1:26- Whatever.

Giving the down-low here first. There is actually a hidden bar which is accessible through the parking garage next door. The store front is just the 'incase of Fire' exit. It's a cool little bar, don't ask about the prices... Well if you need to ask, your not the clientele that is going there. It's just really for the people that don't want to be seen, and who arrive via car into the parking garage. Invite only kinda place...

Why does every smoothie have coconut? Did I miss another trend?

When you have so much money you can build a fake store and have fake employees that just hang out in the "fire exit" cafe. Sounds reasonable.

i know the story of this new space very well. the current owner is and was a well meaning entrepreneur attempting a life long dream of his to bring a wellness concept that might very well work in a hotel setting with founding partners with much deeper pockets.

first of all, the devil is in the details in food and beverage establishment and i agree with probably everyone: in that space there were too many concepts going on and too many opposing categories.
alcohol, nightlife, smoking outside, and bouncers, do not mix with a wellness company by day. the retox and detox idea works on resorts and in big hotels where large hallways and space separate the two concepts so that they don't inflate and deflate each other. not in a small space on east 1 st street.

for this concept to work - you would need another $300k to finish building the space, $1,000,000 to pay serena williams, tom bradey, chloe kardashian, every model during fashion week, etc. to come drink there in the day and night. You might have something silly, but silly some time works.

you would also need an extra 1,000,000 of float to develop the menu, pay rent, pay staff, pay yourself etc for 18 months while you bled money to build the brand.

people should chill the $uck out with the rage and angry words about this. applaud the balsy founder for dropping cash into the well of founders past and present who all tried to build something from nothing. some fail some don't.

easy does it haters.

But what about the bar that's still operating in the basement?