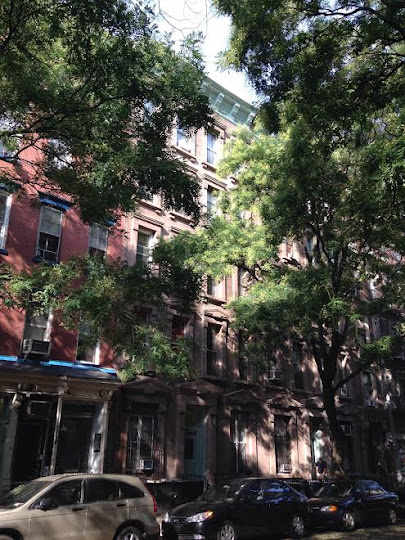 Despite assurances to the contrary, some residents who live in the 16 buildings that Raphael Toledano's Brookhill Properties recently purchased are apprehensive about their future rental situations… especially with the news that has been coming out of 444 E. 13th St. in recent months, where rent-stablized tenants claim that they were allegedly threatened and harassed to leave their homes after Brookhill's January acquisition. (See The New York Times and DNAinfo for more background.)

[T]hese five buildings on East Fifth Street received a coordinated visit last Thursday [Oct. 22] by a group of representatives from the New York State Attorney General’s office, The New York City Department of Buildings and The New York State Division of Housing and Renewal. All apartment doors were knocked on, and representatives spoke with available tenants, made inspections of apartment conditions and building conditions and issued violations to the buildings. Perhaps the presence of these state and city agencies will ensure that Toledano’s tenants on East Fifth Street will not have to suffer what those at 444 East 13th St. did. 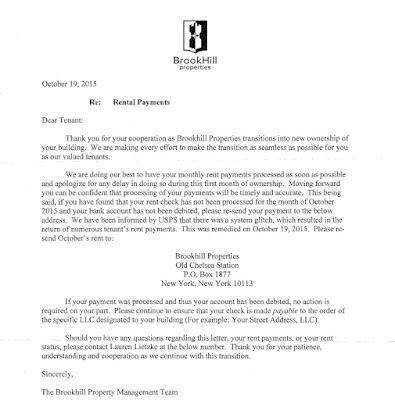 We are doing our best to have your monthly rent payments processed as soon as possible and apologize for any delay in doing so during this first month of ownership. Moving forward you can be confident that processing of your payments will be timely and accurate. This being said, if you have found that your rent check has not been processed for the month of October 2015 and your bank account has not been debited, please re-send your payment to the below address. We have been informed by USPS that there was a system glitch, which resulted in the return of numerous tenant's rent payments. This was remedied on October 19,2015.

If your payment was processed and thus your account has been debited, no action is required on your part. Please continue to ensure that your check is made payable to the order of
the specific LLC designated to your building.

In op-ed, Raphael Toledano says that he wants 'to make the East Village a better place'
Posted by Grieve at 4:12 AM

Would it be possible to wire transfer rent payments to get around this obvious (we didn't get your rent check so you are being evicted) fraud?

Now where can I find a bank in this neighborhood :-) said...

@Anonymous 9:00 AM: wire transfer is expensive. Just use your checking account to make automatic monthly payments (I think every bank offers that online service now). That way you have the bank's record that the check was sent, which is kind of hard to argue about.

And of course keep a copy of the bank's record of payments sent as well as payments received. If they check isn't cashed within 60 or 90 days the check is automatically cancelled with most of these services so you don't even have to worry about "stop payment" fees.