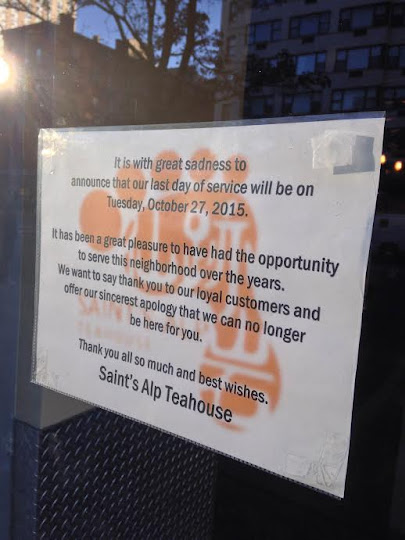 Here's a note from Chan from under the "About Us" tab on the Teahouse website:

The first location opened in 1995 in Chinatown on the corner of Mott Street and Bayard Street. Back then I don't believe bubble tea was even a word in the English Dictionary. Now you can get bubble tea almost anywhere.

When foods get popular, they get commoditized. It becomes a way for many people to cash in on what's popular today. This is a double edged sword. The obvious benefit is the popularity. I am very happy that the product is getting national, even international recognition. The downside is that in many attempts to cash in, some very important aspects are taken for granted. The quality is compromised for profit margins. The experience is compromised for convenience.

This outpost of a Hong Kong-based chain opened in the East Village in 1999. They closed for a month at the beginning of the year for a renovation and menu upgrade.

East Village writer Christine Champagne told us about the closure. She had been a regular since 2002. "I come on my own a few days a week to get a break from work. It is one of those places where you can sit and think and not be bothered or you can chat with the employees if you are so inclined."

The retail strip in the base of NYU's Alumni Hall between East Ninth Street and East 10th Street is rather barren now: Four of six storefronts will sit empty. Subway was the last tenant to go. Birdbath Neighborhood Green Bakery closed in July 2014. Citi Habitats moved out in June 2014. 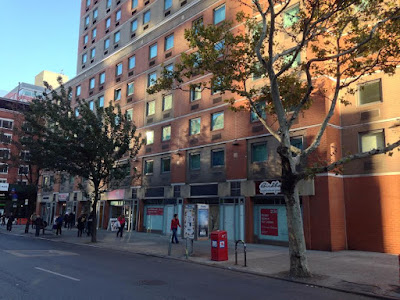 Do we need any more evidence that NYU sucks at real-estate as well?

From 10pm--11pm tonight, they will have an open bar. Free tea drinks as a thank you to all their customers.

I will miss their excellent, affordable, filling Taiwanese food and friendly staff.

Going to miss this place. Thanks to the owner and the employees for giving us such a relaxed and friendly place to spend time all these years.

This really sucks, that place was always busy and a real destination fo bubble tea fans. If NYU is plannng to combine all those stores to bring in another national chain store then they suck too, but we already knew that.

I am going to miss drinking bubble tea because this is the only shop in NYC that I have tried that got it right.

Here we go... another vacant storefront to join the multitudes throughout the EV. At what point do we penalize the greedy real estate agents/landlords for their outrageously overpriced rent hikes that have rendered most of the EV non-accessible to any business/resident save Corporate Chains and the Super Rich? They have effectively INVADED and DESTROYED our communities and neighborhoods.

Another loss for the neighborhood. The losses keep piling up, outpacing the gains.

They had the best toast with condensed milk and coconut milk tea. This is heartbreaking; I've been going there since they opened, and cannot believe today is my last chance. God damn it. God damn it.

You're lucky, Gojira; I don't live in NYC anymore and can't say goodbye and thank you in person.

Have a tea and think of me.

Sad, I will. What kind did you drink?

I appreciate the management putting that sign up and letting us know they are closing. So many of my favorite places in the neighborhood simply vanish without telling their customers. I will definitely make my way there today for one last visit.

Bubble tea is gross. There's just something weird about chucky stuff coming up the straw. I don't know what people see in the stuff.

I thought I wouldn't like bubble tea but a friend introduced me to it and I love it. This place makes the best. The bubbles are never mushy like they are at other places, and the drinks aren't overly sweetened.

This neighborhood, rather many parts of NYC, are being destroyed by virtual greed and oblivion in surrounding communities. The wealthy and elite who are spearheading real estate projects throughout the city don't care about preserving history nor are they interested in respecting what already has been built. Most are apathetic and are solely interested in profit and transforming Manhattan and other boroughs into boring, suburban strip malls. I am disgusted NYU believes they have the allowance to devour anything which stands in their path. If these type of businesses aren't allowed to flourish, conduct business and cater to neighbors such as myself who pay homage to such beloved stores and restaurants, NYC becomes a commodity, thus it is or already is becoming an illustration of any other big city in the US, lacking character and prestige and edge. I guess money is truly the root of every choice one makes. So sad.

I drank mostly coconut, sesame or almond. In the summer it would vary and be fruitier, but now, this season, those flavors were nice.

Please drink your favorite and savour the time. Thank you for writing back. And thank you EV Grieve for the platform.

And of course thank you to all the lovely staff at the teahouse who were so nice, over all these years, to me and all my friends, and it seems, all of you commenting.

Please tell me they aren't leaving the East Village for good! Maybe they can find a smaller space?

So very sad to see this. I have been a customer since they opened. Always felt welcome and valued, whether I stayed long or briefly, alone or in a group, ordering a meal or just ordering tea. I do hope that they'll be able to relocate in the neighborhood.

@Sad -I have just come from my final time at Saint's Alp; I had a large hot coconut milk tea with no bubbles, tea eggs, and radish fritters. As God is my witness, with my first cup of tea I raised it to you and silently toasted you, whoever and wherever you are.

Anon. 4:16, I asked the waiter that; he shook his head and said the landlord doesn't want to continue the business, he's done. He also said they had heard rumors, as has been mentioned here, that NYU plans to shutter the dry cleaners and vintage shop still on the block, join all the spaces, and bring in one giant corporate store.

The place is packed tonight!!!!!!! Everyone wants that one last bubble tea.

Gojira, Thank you. I hope we can meet the next time I come to New York.

Maybe Stage could move into the space? I think they need to start thinking about that possibility. Moving, that is.

This one was the best out of all the bubble tea places.

Who knew something so bubbly and frothy could cause such bitterness and loss?

I wish they could find another space in the neighborhood and reopen.

How about they take over that space on Avenue A vacated by Sustainable NY? Was that the name of the place? That space would make a nice teahouse.

Walked by this area the other day, the stores on the entire block are all gone. A very sad sight. Wonder what's gonna come in? A Duane read? Another bank?