City on pace for a record year with rat complaints 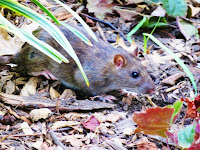 Here's the report from the Associated Press via The New York Times:

The city's complaint hotline is on pace for a record year of rat calls, exceeding the more than 24,000 over each of the last two years. Blistering audits have faulted efforts to fight what one official called a "rat crisis."

But does this mean that there are actually more rats in the city?

New York officials who have been fighting the battle for decades say rising complaint numbers don't mean there are more rats, and they argue the rat population has actually been holding steady the past few years.

A Columbia University doctoral student using statistical analysis last year estimated the number of rats in the city at 2 million, claiming to debunk a popular theory that there is one rat for each of the city's 8.4 million people. But scientists and city officials say it's impossible to accurately estimate the number.

Anyway, what's the city's plan to combat the rats?

We noted the rat reservoir plan back in August 2014. The East Village was to be one of the testing grounds for the program. But aside from some rat academies, we don't recall much else in the way of rat battles.

A Daily News piece from May reports that the seven neighborhoods that got the pilot program — including East Harlem, the Upper West Side and the East Village — saw a roughly 80-90 percent drop in rat sightings, according to the city.

Because we started talking abut trash in Tompkins Square Park in the comments... two photos via Derek Berg from yesterday... 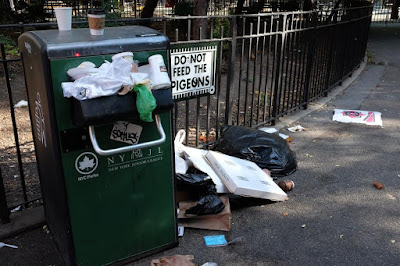 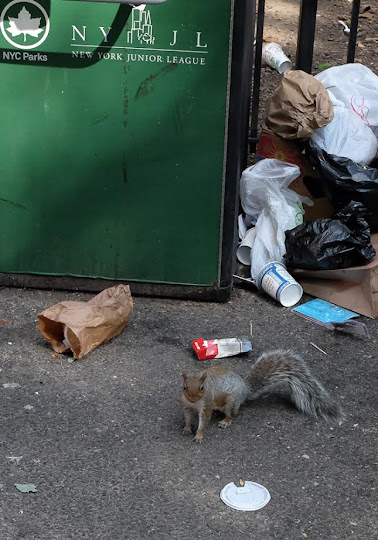 Previously on EV Grieve:
The East Village will be testing ground for a 'rat reservoir pilot'

Do we really have that many more rats, or is it more that the rats bother the new, wealthier residents who are complaining more? I don't know the answer. I am asking to see what people think. I do think there are a lot more in Tompkins Square Park because the city isn't allowed to use rat poison there because of the hawks.

I think that the reduced rate of garbage collection (to save Sanitation expenses) and the lack of enforcement of the requirement that "garbage cans must be leak-proof with tightly fitting lids" are largely to blame, as is allowing easily-chewed-through plastic bags instead of heavy wall cans to be left out for pickup.

Also, what do you expect if you have tens of thousands of more people coming in to eat in the explosion of neighborhood restaurants? Those restaurants have a lot of garbage that has to sit for pickup (or get scattered into the street a la BBQ St Marks).

Tompkins Square is definitely using poison and are spraying it in the rat holes. I've seen several dead rats and squirrels recently and a park volunteer tells me she picks up dead rats and squirrels on a daily basis. The poison cannot be expected to only kill rats. At least one hawk was killed by poison this summer. The only way to change the rat situation is to alter human behavior. Take a look at all the trash everywhere in the park and on the streets. Rat paradise.

Is that Wakka Flocka Killah at the Stepford + Bourgeois offices?

Has nothing to do with the increase in "grab and go" food places for college kids. Nope. None at all.

It's true. I see more rats these days than I have seen in the 35+ years that I've lived here. Day or night.

And yet Tompkins has the largest park staff of any neighborhood park until you hit Central.

I wonder:
If we found a way to eliminate all the rats... Would the roach population skyrocket?

Talk about fighting a losing battle.

Do today's rats carry the germs they did hundreds of years ago, or are today's rats less germy? I want to know if I have to worry about getting the plague.

There is probably no single reason for the rat problem and the suspected rise in their numbers. One notices more rats every time a building is demolished an the rats are scattered to the winds or your sidewalk and behind our buildings. Since every building is subject to demolition these days don't expect to see less rats.

More building with more tenants more garbage more rats. So please eat all you pizza when taking the L train.

Hawks won't get in and the rats will get fried.

Here’s an interesting situation - the city wants to provide a bikeshare program that takes parking spaces away from cars in order to reduce the number of vehicles in the city. How about putting the bike stations on the sidewalks or in some other area and instead of bikes provide CLOSED recepticles for resident GARBAGE!!! Does it take a rocket scientist to figure out if you get rid of the food source you get rid of the RATS!!!

Far be it for any of our elected officials to use the brains that they were once born with. Oh and yeah since you can’t use your fucking brains send back my tax money that goes to pay your salaries you idiots.

Anonymous 7:21, Since you understand that the city wants to reduce auto traffic, why would they move the bike racks onto the sidewalks? Removing available parking space is part of the strategy -- hindering pedestrians is not.

Alright who let the non-sequitur conservative into the comments page? I honestly have no idea where to begin deconstructing his/her argument, as it has fallen into a nonsensical feedback loop.

When oh when is Hollywood gonna make an NYC rat invasion movie?

Advocate for he/she who shall not be named ... said...

It sounds like he (or she) is recommending moving the bike racks onto the sidewalk where cyclists who are locking or unlocking their bikes will be much safer than standing in the street. And he (or she) is also recommending blocking the vehicle pathways with closed containers (presumably very large closed containers, capacious enough to hold all of the garbage bags dropped by the skyscraper condos, East Village Coops, etc.).

That's an excellent idea. Instead of planting concrete barriers to calm traffic, place garbage containers there instead! Fewer rats, no poison needed, and maybe "Vision Zero" will actually start to move towards its stated goal.

Unfortunately, you will never get people to stop throwing out scraps of bread, cornflakes, and other rat delectables to "feed the birds." Or "squirrels."

Today I met a woman in Tompkins and I felt like picking a fight, so I pointed out the scraps of bread she was throwing down were going to the rats as well as the birds.

Rats are smart and cool, rats make great pets, but it's impossible to make people understand that if too many rats propagate in the wild, the city will take steps to poison them—and no one can wrap their brains around that if there is more poison in the environment, it won't just poison the rats selectively. Ultimately, it will even poison us.

I've been told by many, many people what they weren't feeding the rats—they were only feeding the birds or squirrels. In the winter, they insist they have to throw out scraps of bread so the birds "won't starve to death." In my opinion, that's the ultimate hubris—to think a population of wild creatures depends on your actions alone in order to survive. Get over yourself, I say.

When I lived in a basement apartment, rats moved in. They helped themselves to my food. One night I awoke, though in a state of sleep paralysis. I could move my just enough to see a rat popping its head in and out of a cardboard can of oatmeal. I struggled to raise my hand and to form it into "the finger," and forced from my immobile mouth a loud moan of, "FUUUUU - YUUUUU!" The rat just sat there, laughing at how stupid and helpess I looked, snorting, "If you don't like us, why don't you just move out?" I called the landlord, and he brought them something else to eat: those green "rat bars" that they love so much that they fight over, yet which cause internal bleeding and expeditious fucking DEATH.

The plagues was carried on fleas that were carried by rats and filthy unwashed humans. There is now some kind of rewriting of history going on to blame the plague on "giant gerbils" from the middle east. I'm more worried about the layer of feces put down by the huge flock of pigeons and the dozens of squirrels that live behind the 5th St police station. Every day I have to throw out the bowls of cheap cat food that the squirrels and pigeons and rats feast on, put out by the insane cat women.

Too many people in the neighborhood coming to eat, drink and trying to get their fill of whatever they need makes for overflowing trash cans every single night of every single week of every single month of every single year for the last 40 years. Tell CB3 to stop approving new bars and restaurants with liquor licenses and fast food to go.

I think the new glamorous tenements which have $3000 -$8000 rentals are missing something important, a super which either lives in the building or nearby. I've seen many once clean blocks here get really filthy in recent years since the recent upscaling of the EV. There are a lot more dogs and statistically more dog shit and dog piss everywhere, garbage goes out regardless if there is a pickup schedule the next morning, and large "Bro" flat screen boxes are never put out for recycling just to free up space in the bro pad.

Earlier this summer I had a rat eat thru my alternator belt of my Fiat and die in the process. A stinky inconvenient process. East vVillage somewhere around Ave C and 8Th street.

I think the new glamorous tenements which have $3000 -$8000 rentals are missing something important, a super which either lives in the building or nearby.

The original purpose of a building having a super at all was to shovel coal—thus, most or all super[intendants] were on-premises. Our building had a super in a first-floor apartment for many years; unfortunately, this was a very desirable apartment that our landlord decided to combine with the basement space and make it a duplex (a.k.a. "awesome party frat house.")

Our current super lives in Queens; what super can afford the rents around here anymore?