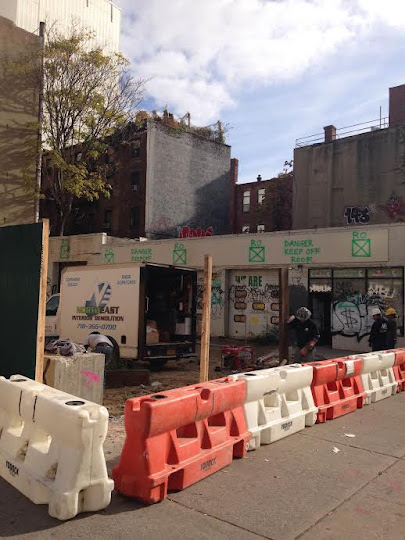 As if that's not newsy enough, the city OK'd the plans (per DOB records) on Monday for the new 10-story retail-residential complex that will call this corner home. (Pretty speedy turnaround for the city. Reps for the developer only filed the plans in July.)

Dumbo-based RSVP Studio is the architect of record. While we didn't find any renderings at RSVP, there is a new one on the website for mortgage lender Ladder Capital, who provided a bridge loan for … brace! 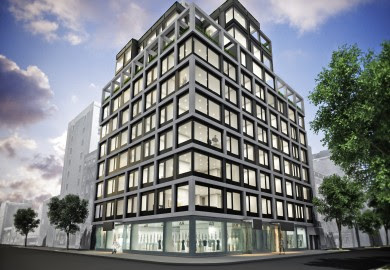 As New York Yimby first noted in July when the developers filed the permits, apartments will begin on the second floor, with four to five units per floor through the sixth story. The seventh and eighth floors will host two duplexes, and the ninth and tenth floors will hold one penthouse duplex with a private roof deck. Amenities include a shared terrace and recreation space on the second floor, and a fitness room, storage and bike storage in the cellar.

The BP — which was the second-to-last gas station left in the East Village — closed in July 2014.

A look inside the last East Village gas station
Posted by Grieve at 4:30 AM

At least those of us who walk by this corner won't have to dodge taxis any more.

@Anon. 9:14, no, instead you'll have to dodge an endless stream of newbies absorbed in their electronic screens, tools riding their Citibikes on the sidewalk, drunk, stumbling brohos, and narcissistic Richie Riches who think the sidewalks belong to them. You may consider that an improvement, though.

Brutalist lite architecture. Why not old style like the buildings on the corner of 2nd Ave. and 6th Street? Is it the influence of Frank Lloyd Wrong?

Best Greed Pig enclosure I've seen since.....oh, right, since Shaoul's Shit Show over on AveA.....did ALL of these architects go to the LegoLand School Of Psuedo-Design? My dead brother could do better....NOW!

Maybe a TD Bank will go in on the ground floor to match its ugly twin across the street.

It's still better than a gas station.

Gojira, Given that caustic fluid does not run through my veins, I don't think I'll see things that way.

Jeebus, it looks just like every other friggin' building going up in the EV/LES. What, is someone selling a kit? Keep you GPS on, cuz otherwise you won't know where you are.

BTW, "...dodge an endless stream of newbies absorbed in their electronic screens, tools riding their Citibikes on the sidewalk, drunk, stumbling brohos, and narcissistic Richie Riches who think the sidewalks belong to them."

Ummm....save for the Citibikes, that's describes the EV for the past 10 years. Today, that IS the EV.

That architecture is so original!

Great. I live a stones throw from there and have been waiting in terror to see what's going up. Guess it's time to start pinching pennies for the inevitable rent hike or building sale.

"Given that caustic fluid does not run through my veins" - then I think you're posting on the wrong blog.

Was there some kind of contest? Design a building that's uglier than a fucking gas station? Did this one win?

And the Cincinattization of New York continues.

@1:53 PM: Good point. And I would add, how much variation is there in pants? Everyone has to put them on one leg at time, after all. Or human beings? We all basically look alike, when you think about it...

Anonymous 4:34 PM, Have you even been to Cincinnati? Cincinnati is unique in this country in *not* looking like every other city. You should take a look at it on Google maps.

Exactly. Cabies parking on the sidewalk. You couldn't get through.

Citibikes, the worst thing Bloomberg came up with.

This building is no fun. Just brutal. Oh well.

Grew up in the East Village in the 80's and 90's. Trying to not to look to the past but when you don't see your childhood anymore, it feels so awful. I already know that these Richie Rich's are already eating themselves alive and turning on themselves which I predicted years ago. Once they realize it isnt where the "scene" is anymore they will move on. ...from my latest book of poetry...one line goes like this ...