[Updated] St. Mark's Place will officially be dead — or not! — on Monday 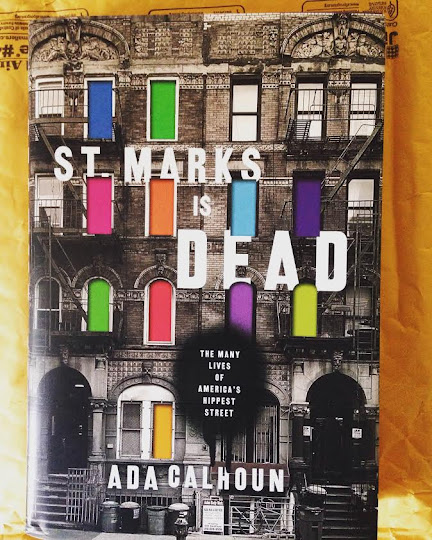 Ada Calhoun's "St. Marks Is Dead: The Many Lives of America's Hippest Street" makes its official debut on Monday… and there's a free book release party at the Cooper Union Great Hall from 6-8 that night… 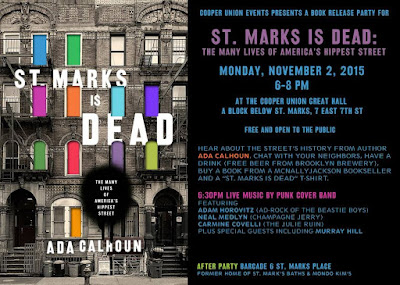 The evening includes a talk from Calhoun, free beer from Brooklyn Brewery and live music from a cover band that includes Adam Horovitz of the Beastie Boys…

The book — a narrative history of the street — has received a good deal of press of late, including a cover story in The Village Voice and a feature in the Guardian UK.

I spoke with Calhoun, who was born and raised on St. Mark's Place, about the in-progress book in March 2013. (EVG is among the many people quoted in the book.)

Here's an excerpt from that interview from March 2013:

You can find a recap of the book event at the Observer here ... and the Guardian UK here.

My theory is that the reality of life on this planet is so unpalatable that most people devote the vast percentage of their disposable time and, specifically, mental energy into generating and inhabiting ridiculous fantasy worlds where they can endlessly debate with one another over such meaningless questions as "When was St Mark's Pl really itself?"

St Mark's was never itself. St Marks was never alive and it can never die. St Marks is an intra municipal delineation. Whatever silly ideas of hip and cool you associate with it are merely the imagos you project onto the place and exist solely within that rotting vault nodding at the top of your neck. (And consensus of opinion does not make reality.)

Actually, Calhoun says it here: "People would describe passionately how it was so vibrant and they were so alive, then it died this horrible death."

Did you read it? 'They' were so alive. So the next time you feel like grousing about how the East Village, etc. is dead, stop for a moment and ask yourself, "Who is dead?"

I nominate Macho Camacho as best commenter ever!

Damn Camacho you blown my mind

New wave of culture originating in the karaoke bars and yogurt shops? Okay. If commerce is a type of culture then sure why not. Nice though, to see that some people are still optimistic about things around here. More power to her.

This is funny. St. Mark's was never born, never lived and never died. St. Mark's Place is a street, that's all. Anyone born here in 1979 missed it's more memorable days when The Electric Circus was open and The Filmore East was just two blocks away. The street was alive only in the sense that the people were alive....high on whatever from drugs to life....from trips to meditation....from homeless, homely, homebodies, to the homeward bound.
Missed the '60's and early to mid-'70's here? Then you missed it. By 1979 the street was mostly just a hodgepodge mess of crummy stores selling socks, pipes, socks, t-shirts and trash.

St Marks of course was never alive but it's street scene in those that hang out there are / were. St Marks has been for decades associated and attracted counter-culture now its a place where people go to eat yogurt cultures.

Each generation here seems to have memories of that particular block which to them symbolized something even if it really wasn't there. I always like the buildings there which for the most part remain (for now). One of my wackiest observations was seeing a young woman a few years back (about 18-20) all dressed in black punk gear, you know the cliche biker jacket, torn black jeans and appropriately torn tee, and of course spiked mohawk. What made this different for me and showed me how much she wished it was 1977 again was her arm tattoo which was a drawing of her with a spiked mohawk hair style. Maybe we should refer to St Marks as "dream street".

Of course St. Marks Place used to be alive. St. Marks Place has died more times than Jason and Freddy Kreuger combined. It's heart is still beating, but there has been no brain activity detected for years. Anyone who hears people say that St Marks Place is Dead or Alive and takes those words literally must be as brain dead as Terri Schiavo and not nearly as good looking. As soon as they redevelop the 3rd Avenue corners into new high rise luxury buldings, it will not only be dead, but buried as well.

Boy Bar had the best drag shows and the Legendary Johnny Dynell DJ'ed there. Great fun!

Say not thou, 'what is the cause that the former days were better than these?' For thou dost not inquire wisely concerning this.

Culture, incidentally, is the sine qua non of the yogurt business.

Some of my photos are published in this book. I got an advance copy recently and am really enjoying reading it. Buy the book it's worth the money. Also, Boy Bar was fun especially since I knew some employees and got free drinks there.

I'm really interested in reading this book, but karaoke bars and yogurt shops as culture? Uh..nice benefit of the doubt philosophy there, but..don't think so. If there was something happening in conjunction with that like a new art or music scene then yeah maybe, otherwise it's like saying that the 50s were a significant part of American culture solely based on the fact that there were alot of soda shops and drive-ins. It just so happened at the time that rock and roll was in its infancy so there you go. When the history books are written about this particular era of New York City one thing is going to be at the top of the list: REDEVELOPMENT and how it drove out the arts, middle, working class and the poor. We'll know for sure in about 20 years, but mark my words…

St Mark's Pl wasn't even the hippest street in NY let alone America. Before the mallification of downtown
there was cool, fun, hip shit going on practically everywhere. West 8 St was much hipper what with Electric Ladyland, Patricia Field, Jackson Pollock, and Azuma. Union Sq had the Palladium, Luchows, Kleins and quaaludes. The Bowery had CBGB's, William Burroughs' bunker , Phebe's bar and real punks as opposed
to the fake punks on St Marks. Canal St was realer and far cooler with all the Army surplus stores, Pearl Paint and Canal St Jeans. Lower Broadway, even today, is far more interesting architecturally than anything on St Marks. One could go on and on. St Marks and downtown aren't dead. They're just different. Weird old NY is long gone. Money changes everything.

No post-event wrap-up? Event pics? It was a terrific night. Sorry if you missed it. Definitely over 200 people filled the Great Hall. Murray Hill kicking things off. Adam Horowitz in the band with Bridget Everett and Erin Markey guest singing. Great author, so I bought 2 books. Your readers should know.

Here's a party recap with some photos and videos: https://wordpress.com/post/9553053/2226/
And here's some info on the book and future events: http://adacalhoun.com/st-marks-is-dead/
Looking forward to being on the radio with you next week, EV Grieve! XO