Report: A small victory for the Stage vs. Icon Realty 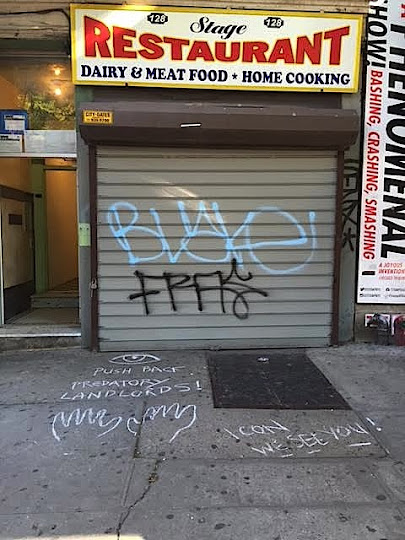 In our post last week about the sidewalk message outside the Stage at 128 Second Ave., an EVG commenter had some info about a recent judge's decision about the ongoing legal battle here with landlord Icon Realty.

DNAinfo has more details about the order issued on Oct. 15 by Judge Nancy M. Bannon, which bars Icon from evicting the Stage based on gas-tampering charges, pending the outcome of the lawsuit owner Roman Diakun filed in the spring.

In addition to preventing an eviction based on the gas-siphoning claims, Bannon also ordered Stage to make “timely and full payments of all rent and additional charges as required by the lease,” according to court documents.

“It’s a nice victory for Stage but the case is not over, unfortunately,” said Diakun’s attorney Ross Kordas about the court’s most recent decision. “We hope that we can resolve it and be open soon.”

Diakun has strongly denied any wrongdoing.

The landlord, however, remains convinced the restaurant worked on the gas lines illegally, putting the building’s tenants at risk, said representative Chris Coffey.

“We are confident that the right thing will happen and they will vacate that space,” he said.

Meanwhile, expect to continue seeing the gate down here between St. Mark's Place and East Seventh Street for the near future. Bannon ordered both parties to appear for a preliminary conference this coming Jan. 28, per DNAinfo.

The 35-year-old diner has been closed since March 30.

The Stage is now crowdfunding to help in its legal fight with Icon Realty
Posted by Grieve at 4:15 AM

So Stage can't open because there's still no gas, but they have to keep paying "all rent and additional charges." Ugh.

why would the landlord move forward on fixing the gas or proceeding with the case?
he gets paid to sit and watch the stage go down the tubes while he continues to take their check to the bank each month.
shouldn't there be some kind of rent abatement for loss of use?

Erm, and given that Roman has had his livelihood stolen from him by the Icon pricks, how, exactly, is he supposed to make those “timely and full payments of all rent and additional charges as required by the lease"?

Is the crowdfunding page still up? I will happily give what I can to help. Good luck to Roman and the Stage!!!!!!!!!

I would image that, since the outcome of the gas-siphoning case has not been decided, the lease is still in effect, so rent payments would have to be made. If it was a matter of the landlord not providing services, the rent could be withheld.

If it's not illegal to make Roman pay rent & all other charges while Stage is closed and landlord drags this out endlessly, it OUGHT to be - especially in the case of Icon (which should be called "I can't"). It should be obvious to the judge that this is a landlord who's trying to put Stage out of business by bleeding it dry.

I wonder how it is that judges are allowed to ignore - or choose to ignore - what's clear in this situation: a landlord with a notorious reputation becomes determined to close Stage down. Icon is taking every unreasonable possible action to ruin a small business, and the judge is abetting that. SMH.

But maybe it's just in line with other things about NYC these days, like the fact that 7 months after the destruction of 3 buildings on 2nd Avenue and the death of 2 innocent people, NOBODY has been charged with anything. Truly unbelievable.

Not sure if Stage employees or partners read this blog but, if any Stage folks need temporary employment, please drop by TSB. We can find something for you until Stage reopens. No comitment required. You go right back to Stage the second they return. Good luck Stage. Do not quit.

Crowdfunding page is still up at:
https://www.youcaring.com/emergency-fundraiser/help-stage-restaurant-reopen/346459

The crowdfunding page to help Stage is still active:

It would be nice if they posted some updates at youcaring.