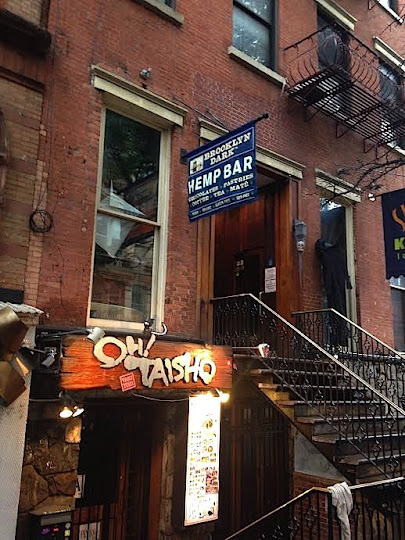 The Brooklyn Dark Hemp Bar — who bill themselves as the first Hemp Bar in the United States — opened at 9 St. Mark's Place between Second Avenue and Third Avenue on Aug. 15.

And it appears that the cafe, which sells pastries, coffee, tea, etc., has sold its last hemp-based product, at least for now.

The note on the front door explains… 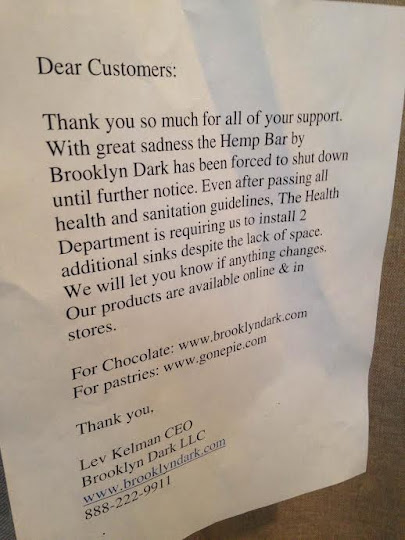 Per the note via CEO Lev Kelman:

"Even after passing all health and sanitation guidelines, the Health Department is requiring us to install 2 additional sinks despite the lack of space."

As of now, Kelman is unsure whether he will be able to reopen the shop, he told us via a Facebook message. Meanwhile, you can still find their products in various stores in the city and online.

The Village Voice, who did not give us any credit, picked up on our story and spoke further with Kelman.

Before opening, Kelman had the site inspected to make sure it was up to health standards. There were two sinks left from the space's earlier incarnation as a cafe called I Am Coffee. One was used for hand washing, the other for rinsing utensils and plates.

But in early October, Kelman says, city health inspectors came in with new rules, which he was cited for violating: There needed to be at least four sinks: one for soaking dishes, two others for sanitizing and rinsing dishes, and for hand washing.

Kelman went to court to contest the violations, and instead was slapped with an $800 fine, on top of being forced to close his business...

Scott Beyer at Forbes, who gave us credit, has a follow-up story. Read that here.

Per a city spokesperson:

Brooklyn Dark Hemp, like every other restaurant in NYC, needs to wash its dishes and cookware properly. A three compartment sink enables washing, rinsing and sanitizing to occur separately, critical for preventing contamination. This restaurant, like others, can request a variance if it can assure the Department that sanitizing can occur safely.

The city also said that the side-by-side sinks each needs a separate drainage system.

"Kelman refused to comply with this demand, knowing that it would skyrocket his business costs while adding no decipherable public safety benefits. It would also be impractical – even impossible – in such a small store that produced very few dirty dishes."

Previously on EV Grieve:
First U.S. hemp bar is now open on St. Mark's Place
Posted by Grieve at 4:30 AM

A new type of totalitarianism by the monsters at Havana on the Hudson.
They shut down the Doji sushi restaurant on 1st Ave. between 6th and 7th a few days ago.

Two sinks, eh? Thanks for watching out for us, career bureaucrats, we surely do appreciate it. But why is it you'll let predatory landlords and developers destroy the history and fabric of the city around us with nary a peep of protest? Inquiring minds want to know.

Why didn't the bureaucrats at H o t H force the coffee shop that was previously located there to install two additional sinks?

I bet this has more to do with hemp than the sinks, the coffee shop that was in this space before didn't have this problem. Plus I don't even see a listing of this business on the DOH website. hmmm.

This place has been closed for a few weeks, and I never saw a grade pending sign in the window. Sounds fishy.

I'd install the 2 sinks at the least cost with big signs, one called Bill's Moneysink and one called DeBlasio Business Killer. Next trick, roll out cashless local "currency"

Where shall we go on this fine hemp-inspired morning :

Why don't we drift over to the Alternate Headline Dept.....hey folks, whadda we got?
"NO Hemp For YOU!"
"Don't Bogart That Sink"
"SinkDoggie Banned!"

* "I don't understand what the fuss is here with needing two Sikhs in the kitchen.....isn't that a Human Rights violation.....just because they wear turbans and listen to groovy music....and those beards, oy vey....


Inspired by an old Canadian comedy proverb (unfortunately taken up by The Forces Of Trump lately):

"When you start out foolish, 'ya got NOTHIN' to lose!"

I don't think the East Village is a good place for a hemp bar to begin with. Brooklyn is better. There are many young children in this neighborhood.

If the DoH was freaking out about people getting high out of their minds on hemp, that wouldn't surprise me at all. Bureaucratic dweebs.

Really, "concerned parent"? You're full of shit. First of all, what do young children have to do with hemp? There is nothing to offend children, what are you talking about? And also, there have always been way more families in Brooklyn, so I don't know where you're referring to where is would be more "appropriate". What an asinine comment. HOWEVER, I will say that they shouldn't be called Brooklyn if they are here in Manhattan, c'mon son.

Alcohol is far more damaging than hemp, and there is a lot more liquor in the EV than hemp. Where is your comment about alcohol?

Anonymous 3:58 -- EVGrieve didn't approve it. I guess it's in internet Hell now.

@ Concerned parent - how about all the drunks staggering through the street because of all the bars and restaurants. I don't think people drinking hemp tea have the same impact.

I never saw another comment from you (aside from the original at 12:09)

I have it on good authority that they refused to toast their hemp flavored bagels, thus the Hemp Bar is now toast.

Hemp will not get you high it is a superfood.

Fair or not, if one's business was at stake you'd think they'd just go ahead and install the damn sinks. I'm all for taking a stand, but who the hell lets their beloved business close over a couple of sinks???

Dude must have been operating on a pretty tight margin if adding two sinks breaks him. And what happened at court that he ended up with an $800 fine?

Shame the Yippies are down the drain this would have been good for a smoke in Remember them?.