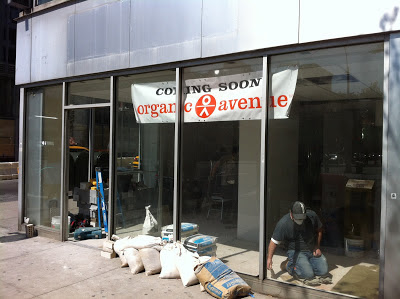 [Photo by William Klayer from April 2013]

Eater is reporting that the juice-bar chain is shutting down all its locations in the city at the end of the business day today ... there's an OA on Third Avenue and East Ninth Street that opened in the summer of 2013.

This location always seemed pretty desolate most times — a surprise (initially, anyway) given its proximity to NYU dorms and the Death Star ... the photo here shows the place from a visit during the afternoon on Aug. 18... 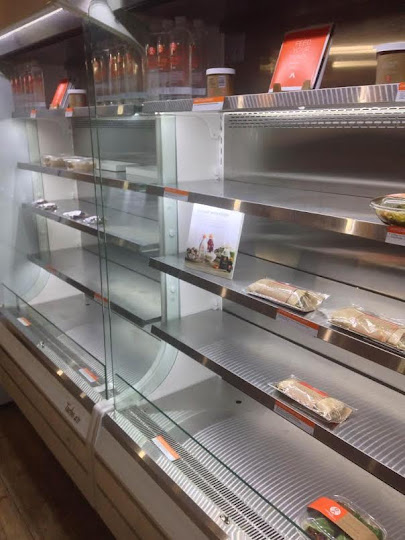 The empty shelves weren't due to high sales volume.

Racked had more on the company's financial troubles back in August:

It's believed that Organic Avenue’s operational losses were at about $600,000 a month between all its stores by May 2015; it lost a whopping $1 million during its worst month, January 2015, including private equity fees to Weld North. Out of the company’s ten locations, only three are profitable, sources say, because of poor location choices.

Racked was told that most of Organic Avenue’s losses came from waste. Its foods and juices come with a short shelf life, and must be tossed after three days: it’s not uncommon to walk by an Organic Avenue at closing time and see bags and bags of untouched food being tossed.

This retail strip on Third Avenue between East Ninth Street and East 10th Street will even be more desolate now... perhaps prompting more speculation about Duane Reade taking over the entire block.

And you don't think that something funny is going on there with such huge losses???

Poor expansion planning? Not enough marketing effort? And why oh why didn't they DONATE food 12 hours before "expiration"... so many places could use it.

Lots of stores and restaurants deal in fresh and perishable food.

Good. I hope all these Bro businesses fail so we can get some real New York food again. I'm not sorry to see them go. These people come here withgrandiose ideas and serve an idea and not good food. As for the money lost, hmm do I hear another trust fund baby. Whah!

On the corner of 17th & Broadway, a Bengali fruit vendor had a stand for 15 years and made a comfortable enough living to support 19 family members at home and send two of his kids to college. As soon as Liquitaria opened on the block, his income went down. After trying to stick it out a few months and losing money each day on goods that didn't sell, he packed it in and gave up the stand and took a job raking leaves in Central Park. Hey, why chew food when you can drink it???

That's too bad. Their vegan tuna wraps were pretty good.

Thank goodness it is gone. Thank goodness the ridiculous bakery that was directly across the street is also gone. Behind these pretentious stores is greed. People who put them together, and create websites with unfailingly inflated language about how they are going to be part of the neighborhood, or this or that, are really into making a killing killing. I suppose their plans are to stay for two or three years and then take their profits and buy a house by the ocean. Opening a business is hard, building the confidence of regular customers is hard--particularly when you are trying to sell a concept. I imagine the coop that owns the retail is will hold out for a huge rent. Given its location (the built in clientele of the Death Star building), it will have to be rented to someone willing to cater to the people who work in the building. Another coffee shoppe? Another salad buffet?

And they probably had a policy of not allowing their employees to just take home the "expired but still good" food that they threw out. Because allowing them to do so might lead employees to purposely keep stuff from being sold so that they can take it home for free.

Organic Avenue was originally an all-raw organic store; when I first heard of their selling out, I wondered how it would play out. I actually stopped going there because there was nothing distinctive about them anymore.

Good. I hope all these Bro businesses fail so we can get some real New York food again.

And that is…? Sorry to disappoint you, but vegan food isn't going away; sure, there are still chicken joints opening all over town, but although vegetarians still number about 3% of the population, the number isn't decreasing, and consciousness is continually being raised.

The funniest thing is that when Commodities first opened its present store, three health-food stores in the neighborhood had a meeting to talk about what could be done to face this behemoth. The stores were Prana [gone], Medina [on 3rd and A, which became another health-food store which is also gone] and

I can't believe it took this long. These all seemed to open at the same time. Weird selection of things in plastic and boxes so nothing seemed fresh, and extraordinary prices. I went in a couple of times and could never figure out why anybody would buy anything there. Very unappealing.

Since when do bros eat organic?

"Since when do bros eat organic?"

Yeah.. my thinking exactly. The bros' natural habitat consists of frat parties and sports bars, none of which serve organic or vegan food. Bros eat hot wings, onion rings and drink beer! I think the OP is confused in their definition of a "bro".

It's laughable to suggest bros would even consider eat food from Organic Avenue!

Sunflower falafel wrap washed down with a matcha chia glo?

Maybe if they sold greasy wings and cans of Natty Light

I blame the location. Of all the Avenues they could have picked, 3rd Avenue is the least organic.

They threw out their food every day and there were homeless and other "freecycle" type people out there waiting for the discarded food, at the location near my work.

Ya $9 smoothies that were only so-so. One time I bought a raw chocolate pudding there & it was a gummy, disgusting mess.