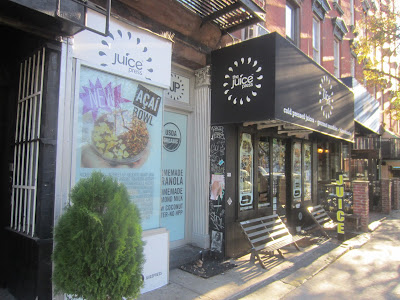 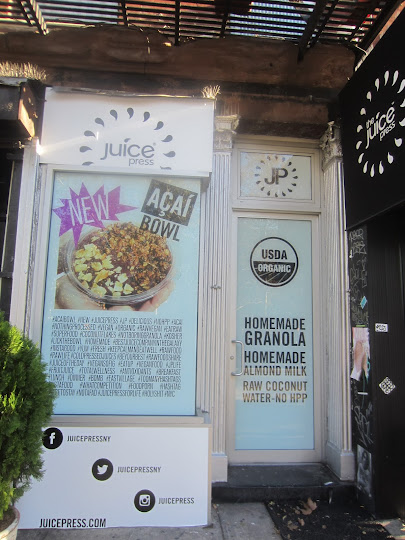 Several weeks ago, handwritten messages began appearing on the front windows … including: "The East Village is the only hope I have left of being fucking cool. This store is the incubator for my next food concept. I hope I don't fail" along with the Juice Press hashtag.

Previously on EV Grieve:
Juice Press is up to something on East 1st Street
Posted by Grieve at 4:22 AM

I don't get the whole "juice" thing, seems like a trend heading to extinction too.

get your acai bowl and juices at juicy lucy next door...support small business.

Finally I found out what an acai bowl is. Ain't nothin but a smoothie served with a spoon and some crunchy shit on top. Pfft.

Wish I had a trust fund to live off of while coming up with ridiculous business ideas that will fail within 6 months.

Super aggressive. Juicy Lucy's been doing the Rio Bowl, aka Acai Bowl, for at least ten years - now it's "NEW" and blasted out a storefront couple doors down. Rude.

ummmm! juice press has been doing usda organic unpsateurized acai bowls made from scratch for 5 years at that exact location. our presence on east 1 st has helped juicy lucy. period.
juice press is a local owned business that people supported and grew. grew to increase our product line up and services. we employ hundreds of new yorkers.
i live in nyc and pay nyc taxes. i started juice press right there at 70 east 1st.
marcus, founder

Glad Juice Press & Juicy Lucy have a good relationship but come on Marcus - you opened up next to Juicy Lucy with an aggressive biz plan. Gotta call it what it is.

juice is a pure health infusion - drink an 'all greens' every day for a week and you will see positive results, at the least your bowels will thank you.