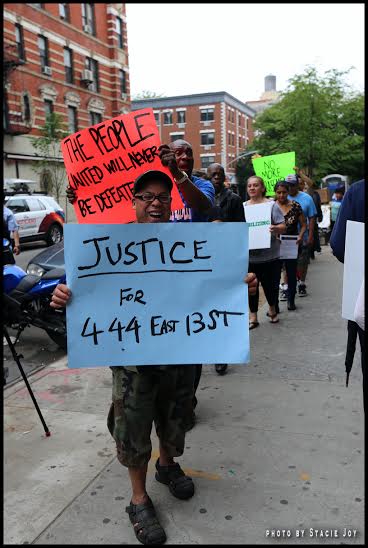 In case you missed the Page 1 story in The New York Times yesterday … the paper published additional recordings between rent-stabilized tenants of Toledano's 444 E. 13th St. and one of his alleged brokers.

In an ongoing legal fight, the tenants submitted audio and video recordings to housing court depicting the agents trying to scare them into leaving their apartments.

“The building is going to be shaking; the vermin will start running,” one agent, who identified himself as Newton Hinds in a cellphone audio recording, said about the planned demolition.

According to the Times, Toledano denied harassing the tenants, and blamed Goldmark Property Management, which he subsequently fired, for all the problems. (Lawyers for Goldmark have denied in court papers that Hinds worked for them.)

In any event, the state's Tenant Protection Unit and attorney general's office are reportedly investigating the situation at No. 444, which Toledano bought in January for $6.1 million ... "and had subpoenaed information on Mr. Toledano's properties."

Toledano's East Village portfolio has grown substantially in recent months. In September, Brook Hill Properties completed the purchase of 16 East Village buildings from the Tabak family, paying $97 million for a portfolio that amounts to 301 apartments and 15 retail spaces.

The current issue of The Villager has a detailed article about the encounters residents of the recently acquired buildings on East Fifth Street have had with the 25-year-old Toledano, who often goes by Raffi.

To date, tenants in six of Toledano’s E. Fifth St. buildings have documented more than 140 interactions, altercations and outright threats by Toledano and his camp during the two-month period from this July 8 through Sept. 8. Some have reported being followed in the street by Raffi’s cousin Isaac Toledano, while others report encounters with a group of men dressed in black stepping out of SUV’s and insisting on entering and inspecting tenants’ apartments.

However, according to the article, there haven't been any "recorded complaints or reports of harassment by Toledano and his team" since Sept. 8. And as we noted on Sept. 23, some tenants in the buildings received welcome letters and boxes of chocolates from Brook Hill.

The charm offensive wasn't limited to residents. A volunteer at the 6th Street and Avenue B Community Garden shared this letter with us:

By way of introduction, I work with Brook Hill Properties, a new landlord in the East Village. One of our commitments is to serve the community and its residents. As part of that, we are interested in partnering with organizations such as the 6&B Garden to explore ways in which we can work together in the East Village neighborhood.

We would welcome the opportunity to come to the garden and learn more about your vision and goals as a leading community group. In doing so, we are hoping to better understand the role we can play in becoming an active community partner.

Meanwhile, according to The Villager, Toledano is currently under contract to purchase an additional 11 buildings in the East Village, West Village and Murray Hill for $55 million.

Brookhill Properties launches chocolate offensive
Posted by Grieve at 4:21 AM

There is a prevailing mindset by many people today that the rules don't apply to them regardless if they a wealthy developer or a neighbor that doesn't pick up after their dog. Most laws and social etiquette are made for reason simply put to make things better for everyone. Now do we have anyone in public office that was not elected with money from developers?

Where did 25-yr old 'Raffi' get all that money? Rich parents?

Scary and sad that people have to take to the streets to fight for THEIR RENTALS.

Wait a goddamn minute, a 25-year-old is the owner of all these properties?! 25???AHAHAHAHAHAHAHAHA. Sorry, couldn't help it. Seriously, God help all those tenants. A 25-year-old.

He would probably like to buy the community green garden and put up another luxury building that no local resident can afford to live in. Be careful....don't let him into the garden with his measuring tape.

Lay down with developers get up with fleas and no garden.

He's 25 and he already owns all these buildings AND he's looking to spend another $55 million on properties? Where's all that $$ coming from? It ain't his $$, that's fer sure.

Ah, capitalism: Where are the controls on who can buy up all these buildings and then decides how miserable to make the lives of these legitimate tenants?

Where the hell is NYC in protecting (actively protecting, right now) the rights of the legitimate tenants in these buildings??