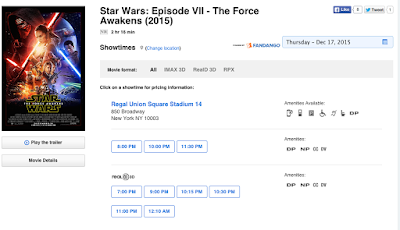 You probably already know that presale tickets for "Star Wars: The Force Awakens" (No. VII!) went on sale last night after the new trailer debuted during halftime of that Giants-Eagles game.

Just out of curiosity we poked around the Regal Union Square 14 website and found seats still available during various times on Dec. 17 and Dec. 18 (and probably other times, though we didn't actually look) ... Union Square is always a site for a marathon screening of George Lucas' saga starting Dec. 17 ... and ending six movies (and several Jar Jar Binks sightings) later with the premiere of "Star Wars: The Force Awakens" in 3D.

No. VII is also playing at the blockbuster-friendly Regal Battery Park Stadium 11. (Does anyone else strongly dislike the Regal Union Square 14?)
Posted by Grieve at 9:09 PM

What do you get a Wookie for Christmas (when he's already got a comb?)

Reality check for the fantasy world and its fans. Star Wars was part of your childhood, it was a movie made for kids (you once) and had nothing to do with science fiction per-say. I always considerate it the end of Hollywoods second golden age (the 70's) and the birth of the simpleton moral, black and white, good vs evil, brainwashing which helped America elect Reagan and empowered his silent (religious) majority. Believe it or not there was a time you could see artistic sophistcated movies in mainstream theaters because that's what was being made by Hollywood.

The rash of Star Wars sequels and prequels are terrible, dull events which have none of the charm of the first two yet fans keep going back to them and Hollywood keeps pumping them out, each worst the previous to cash in on a generation trying to be inspired again.

3D? Jar Jar Binks? Getting to a theater at 4am? Jake Lloyd as little Ani Skywalker (or really, all of Episode I?)

I really think I'd rather spend my $50 on the Episodes IV-VI bluray set ($40 on Amazon) and some pizza or takeout.

I am the proud owner of an ancient, illegally-taped VHS copy of the Star Wars Holiday Special, replete with commercials from 1978, and I can truly say that a more wretched pile of scum and stupidity would be hard to find. Doesn't mean I don't love watching it, tho, and yes, I already have my ticket for 12/18. (Goes to polish her "I Brake for Wookies" bumper sticker affixed to her car.)

There were only two sequels, and the first sequel remains one of the best movies of its genre ever made. And the second sequel is completely fine as well.

If you want quality entertainment, time to invest in a TV with cable and a NetFlix subscription. We truly are in a golden age of content and no amount of revisionist history will change that.

Regal Union Square 14 is like AMC Empire 25 and Regal E-Walk Stadium 13 & RPX in Times Square, that is those are a destination for tourists and B&T-ers. Unlike the other blockbuster-friendly movie theater in the area, such as Regal Battery Park Stadium 11 or AMC Loews Kips Bay 15 or AMC Village 7, those are patronized mostly by the locals. So, I do fear Regal Union Square 14 -- fear is the path to the dark side... fear leads to anger... anger leads to hate... hate leads to suffering.

My husband and I only see movies when they have been open for at least a month, and attend the last showing on a Sunday. That way the theater is mostly empty (sometimes we are the only people there) so the Regal 14 is perfect.

I love that theater, because I like to be comfortable in my chair, and not have my knees crushed against the seat in front of me, as in so many small cinemas.

Last time I went to Union Sq the start time of 4:15 meant the advertisements (for commercial products) and previews would start running for 30 minutes.

Since Abrams killed Star Trek, I'm expecting this to be a pile of shit. Hopefully natalie portman isn't part of this, the last 2 movies would be ok if you could just remove her scenes, admittedly it is probably not her fault the scenes are such horrible cliche.

There were a bunch of really interesting and weird scifi movies in the 70's before star wars, like Quintet, Zardoz, even Planet of the Apes. Its like imagination has been banned, only cliches are allowed.

Kips Bay all the way.

If you see Star Wars at Union Square you'll just be staring at dozens of super bright smartphone screens while everyone shares their special snowflake moment with the world. If you see it at Kips Bay, you will just get to see the movie.