The state of national retailers in NYC; Dunkin’ Donuts tops the list again 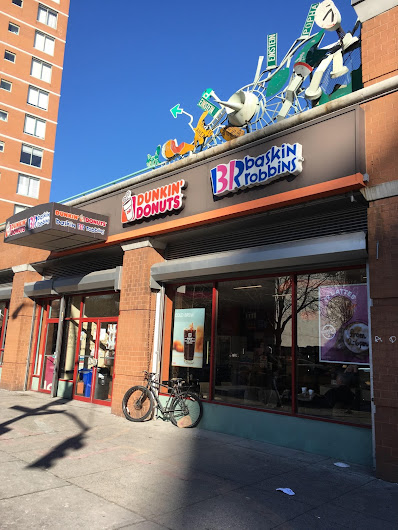 The Center for an Urban Future released its 10th annual State of the Chains report in late December... here are some cut-n-paste highlights ... (the full report is here)...

The tenth annual ranking of national retailers in New York City ... shows a 1.8 percent increase in the number of store locations over last year. Though this is the ninth consecutive year with a net increase in national chain stores across the five boroughs, the growth was limited to a relatively small number of retailers.

In a year in which the challenges facing brick-and-mortar retail have burst into view, this report finds that New York’s national chains are not immune to the pressure. Although food establishments continue to show strong growth, retailers that compete most directly with online outlets — such as shoe and electronics stores — have experienced significant contractions.

Overall, a fifth of all national retailers in the city closed stores in the past year, and only one-in-seven retailers on our list increased their footprint — the smallest share since we began keeping track a decade ago.

For the ninth consecutive year, Dunkin’ Donuts tops our list as the largest national retailer in New York City, with a total of 612 stores, a net increase of 16 stores since 2016 — and 271 since 2008. But this year there is a new retailer in the second position on our list: MetroPCS now has 445 stores in the five boroughs, adding 119 locations over the past year and surpassing Subway, which is now third, with 433 stores.

Fast-casual dining chain restaurants in the five boroughs increased 105 percent over the past decade, from 141 to 289, while the number of fast-food restaurant chains grew 14 percent, from 1,107 to 1,261.2 And there are now 952 chain coffee shops in New York, 65 percent more than a decade ago, led by Dunkin’ Donuts. Food-related chains are responsible for 41 percent of the growth in national retailer locations in New York over the past ten years, the most of any category.

In reviewing the past decade for New York’s national retailers, one thing is clear: the growth of restaurants and food retailers is leading the charge.

The number of coffee chains expanded 65 percent since our first chains report was published in 2008, powered by the expansion of Dunkin’ Donuts and Starbucks, as well as local chains like Joe Coffee. During this ten-year period, chain coffee shops added 621 locations, more than any other category. Dunkin’ Donuts alone grew 79 percent.

The number of fast-casual dining chain restaurants in the five boroughs has more than doubled in the past decade, from 141 to 289. The growth of fast-casual chains like Chipotle and Chop’t is in addition to the growth in fast-food restaurants.

The number of chain bakeries — such as Le Pain Quotidien and Panera Bread — has more than tripled over the past decade, from 55 to 161. This is in addition to the growth in fast-casual chains.

Chains that specialize in frozen yogurt, such as Red Mango and 16 Handles, have expanded 283 percent — the largest growth rate of any retailer category. In 2008, there were 12 chain yogurt stores, and today there are 46. However, the city seems to have reached peak yogurt in 2014, with 57 chain yogurt locations.

Starbucks has more stores in Manhattan than any other national retailer, with 223 locations.

Speaking of Dunkin' Donuts, the one at 250 E. Houston St. between Avenue A and Avenue B will no longer be open 24/7, per the door signage... 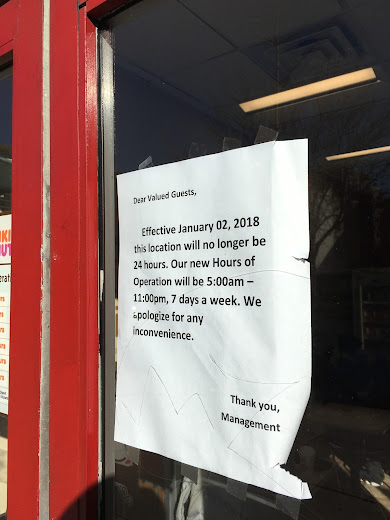 If Dunkin Donuts is going to be the biggest donut chain, the least they should do is sell us donuts that aren’t stale. Their newer stores are struggling and they don't seem to be selling many donuts either. Up in Boston the Dunkin donuts and coffee are much better than what they sell here, and in many locations they make the donuts right in the store. Earlier closing times are a sign of trouble, and unless they can sell more coffee to compete with Starbucks and McDonalds they are doomed. Krispy Kreme in Penn Station actually ships their donuts in from Pennsylvania every day and they are as fresh as can be. Even the Original Glazed, which have a shorter shelf life, are fresh. Maybe Dunkin Donuts should just sell Kripsy Kremes and call it a day.

Dunkin' Donuts are crap pieces of cardboardy dough, tie two together and they could be used to anchor the aircraft supercarrier USS Nimitz. Seriously.

OK here's one that got missed on the "Bring back" list - Disco Donuts. There baked goods were as wonderful as their late-night ambiance. Those bear claws...the white-iced apple turnovers the size of Conestoga wagon wheels...(makers Homer Simpson gargling sound here.)

The key with Dunkin' Donuts is stick to the very basics: plain, glazed, and chocolate.

@Gojira. Disco Donuts would be awesome! Bring back the corner donut shops with amazing jelly donuts, fresh coffee, and counter service that was as good as Waffle House, with expert short order cooks who knows what they were doing.

The Greek Diners have forgotten how to cook food like these places did, and many are using cheap ingredients they buy at Costco. They just closed down the East Side Diner up on 23rd Street and 1st Avenue last week, another Greek diner that was once pretty good. It was sold to another owner about a year ago, and now it's gone too, mostly because the food was crappy. Apparently they also couldn’t negotiate a better deal with Ben Shaoul, but they should have known better.

Dunkin Donuts eggs texture resemble bra pads. Their donuts have decreased in size and seem to more sugary these days.