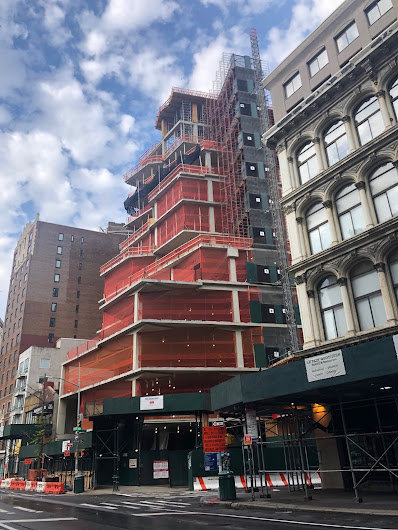 In case you haven't been over by the southwest corner of Broadway and 11th Street of late... it appears that workers have nearly reached the top of this 12-story zig-zagging office complex (this development made the cut for essential construction during the COVID-19 PAUSE)... 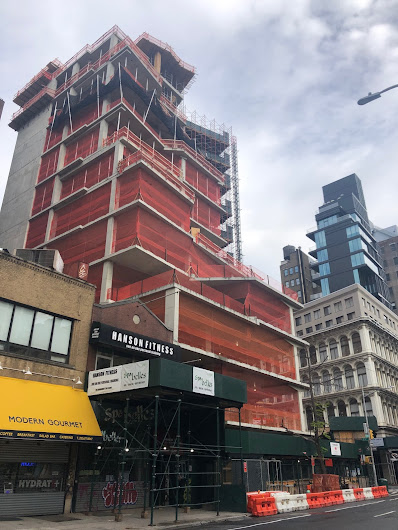 According to a news release about the address: "799 Broadway will feature floor-to-ceiling glass, private terraces, and 15 foot high ceilings. This combination of highly desirable location and state-of-the-art design will appeal to New York’s most progressive and creative companies."

And (previously revealed) renderings of the new building via architects Perkins and Will ... 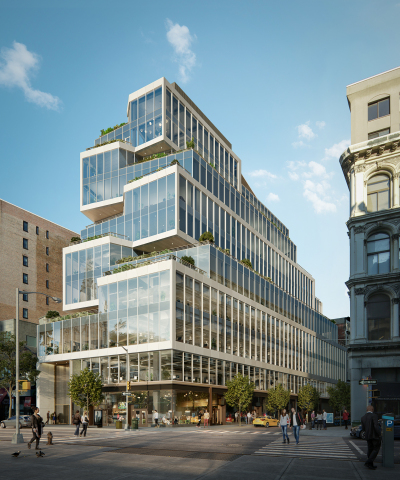 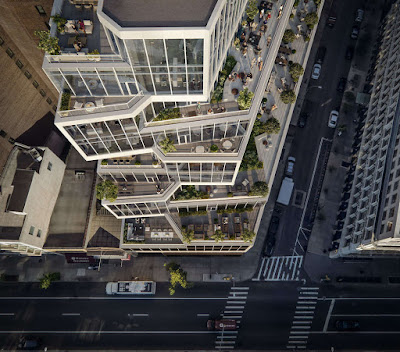 The official site for 799 Broadway is at this link.

EVG reader Gojira shared these views of the new building from 11th Street and Fourth Avenue from over the weekend... 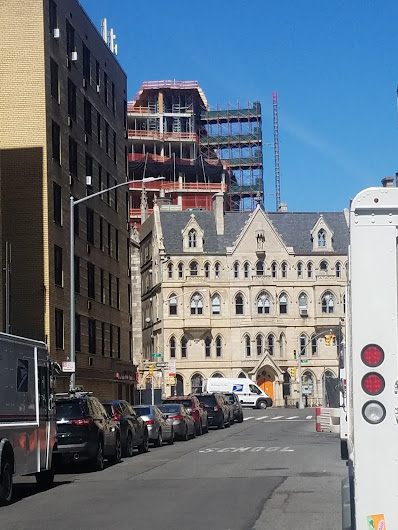 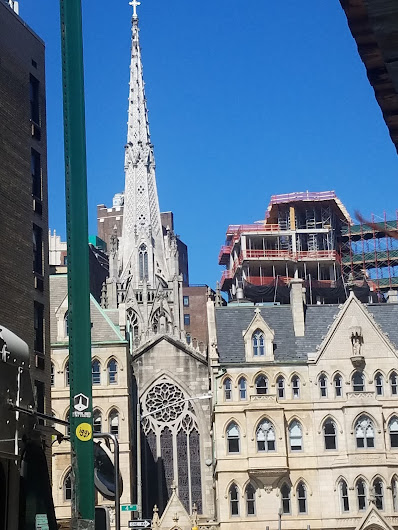 Per Gojira: "Saw this monstrosity looming over the Grace Church Rectory, and competing with that beautiful spire for air space. What a fucking travesty."

No. 799 was the former home of the historic St. Denis building, which opened as a hotel in 1853. Normandy Real Estate Partners bought the property for somewhere in the $100 million ballpark back in 2016. 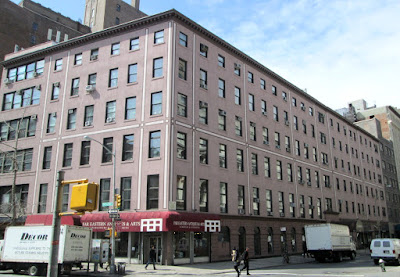 terrible
what more is there to say

It will be most interesting to see how real estate in NY rebounds - or not - in the coming months and years. Can't imagine people will be flocking to live here as eagerly as they used to.

What prices will they be able to get if they have to do 50% occupancy per square ft. compared to pre pandemic? No company will pay what the landlord planned on asking

Horrific, it's like an invasion from an alien race, greed monsters.

What a way to ruin a beautiful street view looking toward Grace Church School. I guess we're not entitled to see open sky any more. I hope whoever developed this monstrosity loses their shirt on the deal, but of course that won't take the ugliness away.

I wish I had a billion $$ so I could buy this building and LEVEL IT, then replace it with something smaller & appropriate.

Seeing that stupid half built jenga building looming above Grace Church is so distressing. It just ruins that area. This is similar to the Death Star crushing Astor Place.

What an ugly building that is totally out of character for the neighborhood. This building brings overpriced apartments that will mostly go to foreign buyers and ground floor retail space that will probably stay vacant as very few commercial tenants will be able to afford the high rents the building management will be asking for.

Nothing is as bad as Extell's 72 story condo tower at the base of the Manhattan bridge (formerly pathnark). Talk about ruining an iconic Manhattan view from a Brooklyn vantage point. It's all about $$$$$$$s

Meanwhile, at 133 3rd Avenue... well, nothing. It's been what, seven years? Still a sidewalk shed (which, to someone's credit, got moved back within the past couple years, allowing the pedestrian flow to resume a more normal path) and a hole, covered by unfinished slabs of concrete. What's up with that?

"Fucking travesty" is too kind.

If I had a billion $$, I'll get the hell out of this dying city, and wouldn't waste a dime on it.

Love the modern architecture and play with shapes.

Very seriously - in the 30 or so years when I had my psychotherapy offices in the 1853 building that was torn down by this company, many many people encountered at least one ghost, usually on the basement, probably of a mobster killed there at some time.

I’ll be interested in hearing about how he returns when the building is occupied.