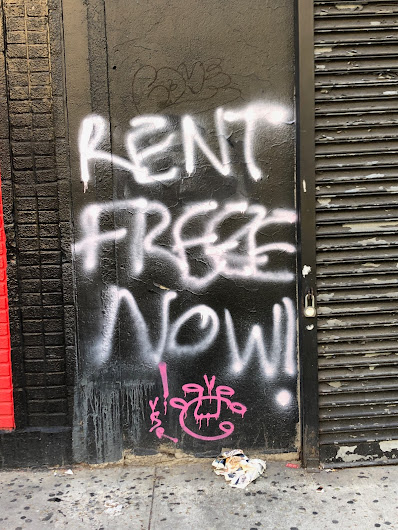 The rent strike movement is underway, including in the East Village, where "a group of tenants wrote a letter to their landlord, NAL Management, asking to 'open a dialogue' on possible concessions for hard-up renters." (Gothamist and Curbed)

The Central Park field hospital is closing soon. The bigots from Samaritan’s Purse have been invited to move their operation to First Avenue.

That’s nothing less than an insult to New York’s LGBTQ community. pic.twitter.com/3Kk1Wg9f0Z

The struggles of Forbidden Planet during the COVID-19 PAUSE (NY1)

Check out Phil Kline’s "Every Night at 7," a musical tribute to the evening cheer for frontline workers (Vulture)

Podcast: The New Yorker's Peter Schjeldahl — a longtime resident of St. Mark's Place — "on his adventures in life as an accidental art critic." (ARTnet)

The New Yorker's 24 hours of NYC in the time of COVID-19 includes the 7 p.m. cheer from Seventh Street (Official site)

Thank you to Mt. Sinai Hospital and all the dedicated staff and medical workers there who are helping treat Covid patients in our community.

NO THANK YOU to Samaritan's Purse, a group that has come into our city with their anti-LGBTQ policies and are imposing those policies on New Yorkers who might want to volunteer to help through their organization. Mt. Sinai has an anti-discrimination policy. It seems this policy should prohibit them from forming partnerships with groups such as Samaritan's Purse, that have discrimination, homophobia and bigotry spelled out as defining regulations in their operating guidelines. Samaritan's Purse does not represent the community spirit of New York City.

Shame on Mt Sinai for letting these bigots in. They should be investigated and shamed for violating non-discrimination policy and law.