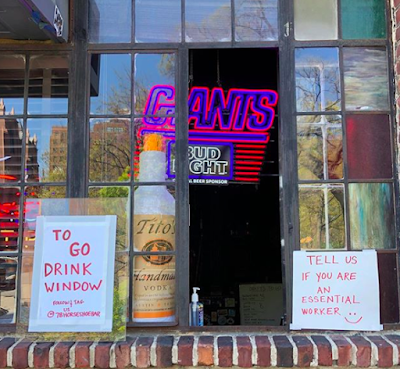 The bill would also provide community boards and local government with the power to conduct oversight that ensures an establishment is operating safely.

"If we want our favorite bars and restaurants to survive the crisis, we’ve got to help them adapt," Hoylman said in a statement. "My new legislation will allow bars and restaurants to provide beer, wine and cocktails for take-out and delivery for two years after the crisis ends, giving these establishments a much-needed lifeline while New York slowly returns to normal."

Per info via Hoylman's office:

The bill includes multiple safeguards to ensure all sales are safe and legal. It would require all alcoholic beverages to be sold in closed/sealed containers, to be accompanied by the purchase of food, and to comply with open container laws.

It would also require the State Liquor Authority (SLA) to conduct regular outreach to municipalities and community boards to solicit comment, and would allow the SLA to hold hearings to decide whether to suspend or revoke a licensee’s ability to sell alcoholic beverages for off-premises consumption in response to complaints from community boards or municipalities.

The bill requires the SLA to report to the Governor and the Legislature on the implementation of the law, and to hold public hearings across the state to hear from local communities about how the law has affected them.

New York’s hospitality industry is facing enormous economic pressure from COVID-19. According to a recent report from the New York City Office of Management and Budget (OMB), restaurant revenues declined by nearly 90 percent immediately after the New York on PAUSE regulations took effect.

9:30am: "Queue the obligatory EV Grieve comments about drunk bros ruining their sleepy neighborhood." And CUE the obligatory EV Grieve comments about letting obnoxious drunk bros be free to be obnoxious drunk bros. I like Hoylman but some bars already have drinkers all over the sidewalks and it's not cool. Don't see how the city/police will be able to keep this quiet and sane.

SHEESH. You're starting it

All for this, time for the influence of the Puritans and their blue laws to disappear.

Cautiously optimistic about this. I do expect to see more outdoor drinking & socializing until it gets too cold in November or so. What I hope is that it won't go into the super late hours, and people won't get so wasted that they lose a lot of inhibition. Let's see how we handle this, EV & NYC!

i think this is a great idea. small biz forever!

Come on kids, lets go look at what the world after quarantine looks like, oops, don't step it the vomit on the sidewalks, in the parks, but, yeah, come on lets not forget we are all (stepping) in this together.

Sorry, this neighborhood is way too saturated with screaming drunks to add this to the mix. Anyone been to Bourbon Street with its "go cups"?

You can tell this is ill-conceived by the reliance on the SLA to prevent matters from getting out of hand. Isn't that the same agency that has refused to regulate the number of liquor licenses and has permitted unlimited drinking, in spite of what the law says?